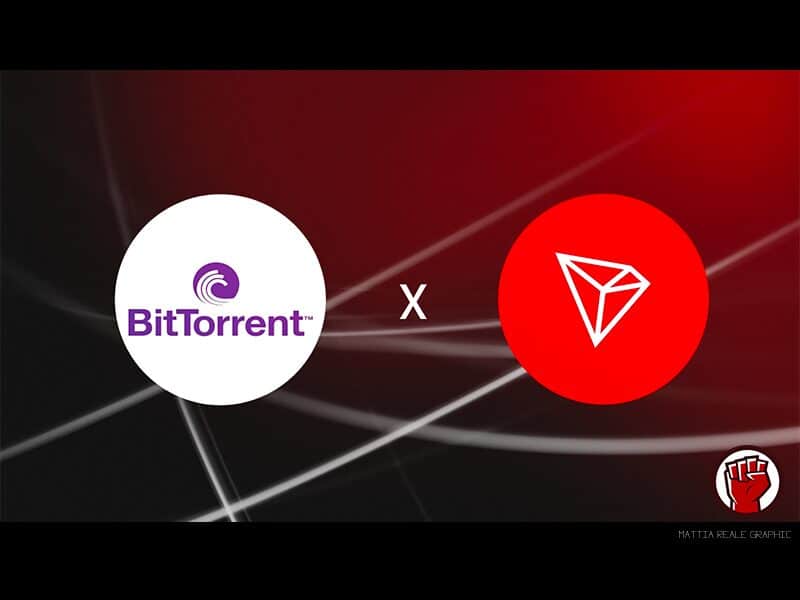 Tron has completed its first BTT (BitTorrent Token) airdrop this week. Tron’s acquisition of BitTorrent is one of the boldest moves of the crypto space into the non-crypto digital economy. The tokenization of a torrent client does actually make sense as it can improve user-friendliness, downloading speed and it enables rewarding seeds. However, BitTorrent might be out of Tron’s league regarding its possible transaction volume.

Justin Sun and Justin Knoll state in this Youtube video that BTT will serve as a means of payment on the BitTorrent protocol to facilitate faster downloads on the network to paying users. Another role of BTT is to reward seeds (users who provide files for others to download). The question of why they did not just make Tron (TRX) the native token of BitTorrent comes up automatically. It would have given TRX potentially a use-case. Knoll states in minute 9:40 that they created BTT because they wanted to “address this giant potential market without having to give all those people TRX”.

Naturally, we have to question this claim. Of course, the token sale was an easy and obvious reason to create a new token. It brought Tron $7.2 million in the public sale alone which finished within 15 minutes. Knoll further states that the Tron Foundation created BTT  “in order to protect the existing TRX holder without diluting a lot of TRX”. It would be a fair approach to protect the earlier and long holding investors of TRX, however, former BitTorrent CEO has another opinion on the matter.

In an insightful interview in November for BreakerMag Simon Morris said that he “suspect[s] that what they’re really going to do is they’ll do it on some central server, they’ll wave their hands and say, ‘Oh, it’s a Lightning Network for Tron,’ or something, and pretend it’s Tron-based, but it’s not really Tron-based.” Later Tron confirmed Morris’ assumption in its whitepaper published on 3rd January: “BitTorrent Inc. will be deploy [sic] an “on-chain/off-chain exchange” which exists to facilitate the transfer of tokens between a high-performance private ledger and the public TRON blockchain.” Morris already concluded back in November that “there’s “no way” the Tron blockchain can handle the transaction volume needed to tokenize BitTorrent“.

It is hard to tell to what degree the Tron network is actually decentralized/centralized.  A centralizing approach is the fact that only witness nodes can produce blocks on Tron. Another one lies likely within the circumstance that Tron claims to be able to process 2000 transactions per second. Especially, since Tron’s code is in a very bad state, according to Coin Chico’s review in which a java coder random sampled java code on Tron. The coder reviewed the code twice and his research indicated that the state of Tron’s code actually worsened over time. Questionable whether code in such a state can actually support a top-performing blockchain.

Therefore, the fact that BTT runs on a centralized ledger at least partly throws even more shades on Tron.  According to Morris, “the transactional capacity we [were] looking at was needing hundreds of transactions a second just to get started”. It is clear that TRX is not actually able to perform 2000 transactions per second. Even Tron’s network explorer Tronscan indicates that the network is able to only perform 748 transactions per second as of now.

The BitTorrent community so far doesn’t seem to have adopted BTT. The current actual transactions on the network are 13 t/ps. Not the traffic that you would expect if BTT adoption actually happened already. In all related forums BTT & Tron’s acquisition of BitTorrent is either totally unmentioned or discussed negatively. Furthermore, the tokenization of BitTorrent is also a monetization of BitTorrent to which the community seems to be allergic. Back in 2013 – 2016 when BitTorrent began to monetize its service with ads the user numbers were actually dropping. However, let’s apply the same approach that Coin Chico used in his review of the Tron code and revisit the state of BTT and Tron in a few months. Adoption takes time and maybe the situation will actually improve.