Seems like the bulls are back. And judging from its behavior the last three days, this time, it promises style and aggressiveness.

The weekend saw bitcoin break the $10,000 level. The price went as high as $10,350, according to Bitstamp data. This is the highest of bitcoin’s price since September 24. Meanwhile, the average price high on CoinDesk’s price index was $10,332.

No One Saw It Coming

Bitcoin was struggling to maintain the bearish pressure below the $7,500 mark before the moment of truth.

The bears were still out when it happened. It was just after Zuckerberg spoke on Libra’s difficulties. Libra’s announcement had proved to be a boom for cryptocurrencies earlier in the year. The digital currency has since run on some problems and roadblocks. Hope was not in the horizon

Zuckerberg’s testimony before congress was still sinking in when China’s announcement came. A move that even the top analysts missed. They were busy spelling dooms and deep drops. They can’t be blamed, all the charts revealed were death crosses. But bitcoin owes no one any explanations.

This is the fourth time since 2014, the death cross has trapped sellers on the wrong side of the development.

Speculations on the sudden cause of the rise are still rife. Some experts are pointing to Chinese president Xi Jinping’s announcement on china’s bid to accelerate the adoption of blockchain as the reason behind the bullish run. It’s no secret; china has a huge say in crypto business. China’s cryptocurrency demand was one of the biggest contributors to the 2017 Bull Run.

Renowned crypto followers like Anthony Pompliano believe that the public support from the Chinese president should have a positive effect on US and major nation’s decision in regards crypto adoption. Meanwhile, the investor community expects the rally to continue.

However, other analysts thought the optimism was premature. And that china is only developing their own digital version of its currency. They also noted that China is yet to lift the ban on bitcoin and other cryptocurrencies. 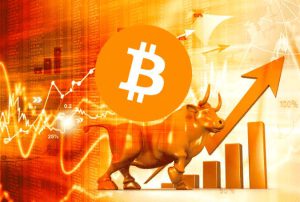 Currently, bitcoin’s price is staggering at $9714. The downside is trying to hold above the ascending trend lines. The current price is above the Simple moving averages. The 50 SMA in the one hour is holding at $9416 while the 100 SMA at $8563.

The 50 SMA and 100 SMA gap continues to widen, an indicator of strong bullish control. The relative strength index, on the other hand, shows a trend in favor of a bull and a positive sign of the probability of crossing $20,000 before June 2020.