Many traders on the stock markets fear that there will be a crash soon. We are currently in the second-longest bull market since the second world war. While many people are still optimistic about a future rise, the majority seems to be nervous as every bull market has to come to an end. Should Cryptotraders be worried as well?

Cryptomarkets have not yet experienced a major economy crash

Bitcoin was created in January 2009. A fact that we know from Satoshi’s first message on the blockchain which dates back to that time. Thus, Bitcoin experienced the immediate aftermath of the financial crisis of 2007/08. But Bitcoin holders did not experience the impact of an economic crash directly. So, being invested in crypto, do you have to fear the economy crash?

Correlation between Bitcoin and stock markets

There seemed to be a correlation between the course of Bitcoin and the S&P 500 Index. They both reached their all-time highs towards the end of 2017. Also, they both underwent a correction in the following months and found a temporary bottom at around the same time. It seems that both are still in a bear market. Although S&P 500 recovered much better than Bitcoin. However, if you are invested in the cryptomarket for a longer time you will know that correlation is the exception, not the rule. 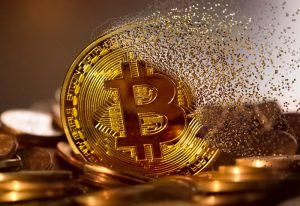 Bitcoin is much more volatile than the stock market in general. In the past Bitcoin had a much smaller market cap. Investors weren’t professional traders and miners did not own computation centres. They were computer geeks or libertarians and anarcho-capitalists. They did not discuss whether Bitcoin is a security or not and how it is going to be regulated, they discussed how Bitcoin is going to undermine this system. So obviously much has changed and maybe Bitcoin has crossed a line where its course now correlates much more with other assets.

But this is only half the story. Bitcoin maybe was not hit by the crash of 2007/08 directly. But it was heavily influenced by its aftermath and could actually benefit from it. People distrusted the Euro during the financial crisis and invested in alternatives like gold, silver or Bitcoin. Bitcoin was not yet known as a safe haven or as a store of value. But many people trusted Bitcoin much more than the Euro. Just as Venezuelans trust Bitcoin now much more than the Venezuelan Bolivar. In hindsight, these people made more than a right call. They did not only store their value, they could multiply it by a factor of x thousand as we all know. So would the same thing happen again during the next major economic crisis?

The real question is what happens after the crash

Given that many crypto investors now are also invested into the crypto market as well, a panic sell of shares is likely going to affect crypto too. It is maybe this fear of an actual economic crash that makes investors look for sell opportunities that triggers the bear market that we are currently in. However, the really interesting question is how crypto markets would evolve after the crash. 2009 and the following years have proven to be the perfect years to promote Bitcoin. Satoshi Nakamoto hinted with his first message on the blockchain that he disapproves the current financial system. The same system that created the real estate bubble prior to 2007/08 is creating the very same bubble again. So, a first correction is likely. What happens after the crash is the interesting question, whether we make profits or losses.  But this is the subject for another article.