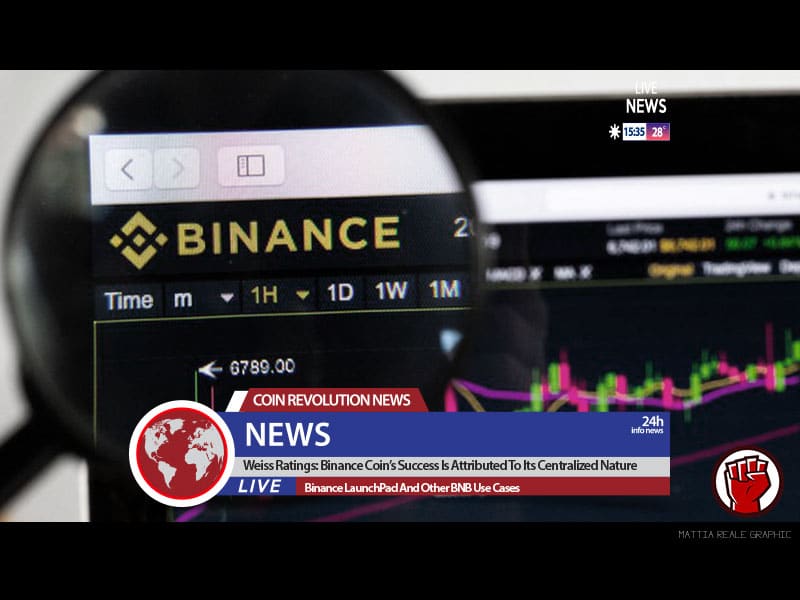 According to a tweet by financial ratings agency Weiss Ratings, on July 25, 2019, Binance Coin’s (BNB) is a success due to its centralized nature. Currently, BNB is ranked the 6th largest digital currency by market capitalization and this year it has had a good run.

At the time of this writing, the digital currency is sitting at $28.90 having slightly declined over the last 24 hours and also has a market valuation of $4.5 billion. This is quite impressive and noteworthy since its opening price was $6.19 with a barely $800 million market cap at the start of the year. Also let’s not forget that during the Initial Coin Offering, BNB was worth only $0.10.

In the first few months of 2019, BNB’s price kept spiking despite Bitcoin’s flat trading. In June this year, the coin from the world’s largest cryptocurrency exchange hit its all-time high of $39.57.

Binance LaunchPad And Other BNB Use Cases

First of all, the uses cases Binance provides for its digital coin are to do with paying fees on the platform itself. A lot of users prefer to use BNB over Bitcoin to pay their trading fees because it offers a major discount of 25%.

In addition to that, BNB has been the major digital currency that Binance received during the token sale of assets on Binance LaunchPad. Some of the examples include Fetch.AI, BitTorrent, Matic and Celer. Also, on March 24, 2019, the crypto exchange announced that its following token launch will not be on the first-come-first-serve system but rather on a lottery basis.

Blockchain Charity Foundation, a non-profit organization that was initiated by Binance, uses BNB for its charity programs. An example of such programs is the lunches for schools in Uganda.

Additionally, after each quarter, Binance conducts a strategy of burning a certain portion of their native coin in their reserve allocation. This helps in spiking its price by making the asset a rarer thing.

All in all, there are over 80 use cases for spending, using and storing Binance Coin. The exchange had in the past stated that this number will likely go higher due to its #UseBNB initiative and also the increasing number of platforms and new crypto projects being launched on Binance Chain.

There are those in the crypto community who doubt the Weiss Rating’s stance. On the comment thread on twitter, some users opined that the coin’s success should not be attributed to centralization. A user expressed an opinion that the extra minting of Tether (USDT) has pumped the price of BNB a few times. Others believe that BNB’s success could be short-lived due to the regulations in touch with Binance that could potentially kill it.

Weiss Ratings: Binance Coin’s Success Is Attributed To Its Centralized Nature was last modified: August 21st, 2019 by Samantha Mitchell
Previous « Fresh BTC Upward Trend May Begin In September & More
Next The Most Significant Use Cases For Cryptocurrency »

Chinese Lead In Investment In Cryptocurrency And Blockchain In The US