The Venezuelan government has announced that it will start to monitor bank accounts involved in Cryptocurrency transaction. All those operating in this business should sell the Cryptocurrencies at recommended prices. According to the country’s Vice President Tareck El Aissami, those found trading the virtual currencies at prices that are “undermining the national currency” in the government’s opinion will face severe punishment.

In recent times, the Venezuelan government has been trying to reduce capital flight. The government hopes to solve this problem through various phases. The regime is already through with the first phase, named “Operation Paper Hands.” The government is optimistic that this phase will help in addressing the areas that the previous one did not cover.

The second phase was launched last week and the government is targeting “gold smugglers” who buy gold from small miners only to sell it in foreign markets. The government claims that the activities of these smugglers enable them to distort the value of the dollar in the country. The government further says that these criminals are now using Cryptocurrencies and have ended up affecting the country’s monetary system. 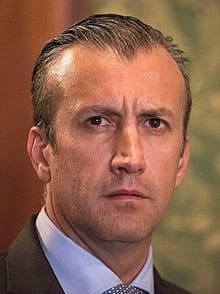 The Vice President has added that this move will also address capital flight through Cryptocurrencies. It will now be illegal to trade the currencies “at speculative prices.” To achieve this, the government will be monitoring all bank accounts that are involved in Crypto-related transactions. The government is upbeat that it has the capacity to execute this plan.

The Vice President told La Red that those found guilty will face severe punishment and be prosecuted. The Vice President also shared what the government achieved in the first phase. He said that the government has frozen bank accounts at Banesco bank with about 5 billion bolivares [~US$50,000]. Another 12 trillion bolivares [~$120 million] was impounded on their way to Colombia.

country’s financial system will have to experience. The paper added that those who engage in such activities are not lucky as the government will take measures that target them. It will be difficult for the “gold smugglers” and those who trade Cryptocurrencies “at speculative prices” to evade under the government’s latest move.

Given that the government’s finding did not link the three houses to the underground Cryptocurrency activities, the Vice President announced their reopening. The government then put them in charge of the nation’s foreign exchange transactions and remittances. However, the three Caracas-based exchanges, Zoom, Italcambio, and Insular are in no way involved in Cryptocurrency, as a visit to their respective websites revealed.

Currently, the country as 16 certified exchanges, as announced by President Nicolas Maduro in April. Those wishing to buy or sell the virtual currencies can use the exchanges. The country is planning to list Petro, its Cryptocurrency later.