Twitch had silently removed the option to pay donations and services with BTC and BCH in March. Now the Amazon subsidiary has reintroduced the option through the same service as before, Bitpay. However, the reintroduction came just as silently as before as Twitch did not care to give any comment about it. This step by Twitch follows a rally of about $3500 to currently $11,000 USD. 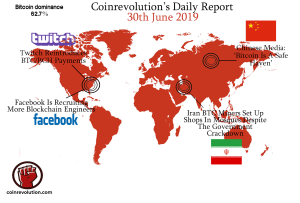 Chinese media have reported repeatedly very positive about Bitcoin. This includes private and state-owned media alike. Although it is a very volatile asset, many news agencies mention that Bitcoin has a ‚store of value‘ or ‚safe haven‘ quality.

According to the career section in the social media giant’s website, there are 31 job openings in the company requiring expertise in Blockchain technology. Six of the listed job openings are for the Libra wallet app Calibra. These openings are all for engineers and data scientists tasked with analyzing the interaction of users with Calibra and other services from users. The job description states that Calibra will be the primary delivery avenue for most financial services, beginning with personal payments. The wallet will then be expanding to commerce based both online and offline with the ultimate plan being a personal financial management avenue with lending services.