Trump Advisor Thinks Of Facebook’s LibraCoin As a ‘Good Thing’

Stephen Moore, Chief Economist of the Heritage Foundation and advisor to the Trump administration, has spoken positively about Facebook’s stablecoin Libra. He said that cryptocurrencies “are coming”, that there will be “competition from private currencies” to the Fed and  that it will become a “challenge for central bankers”. Ultimately, he said it’s a good thing but did not expand much as to why he thinks that way. 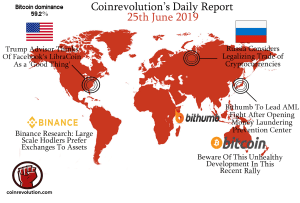 We have warned of a correction in our last analysis. Ultimately, our analysis was wrong as the price broke above $10,000 and there is a huge euphoria going around that this trend will continue. However, while I too have a bullish sentiment now for the short-term, I would still like to point out that we are absolutely not in the clear. Here are some facts that should make you concerned about the bullmarket being legitimate.

Bithumb is leading the war on money laundering by opening a money laundering prevention center in South Korea. This is according to a report from Korea Joongang Daily that covers the country. By unveiling the center, Bithumb will be the first and only Crypto exchange platform in the world to take concrete anti-money laundering measures.
In the past, regulators have been accusing Crypto trading platforms of aiding and abetting money laundering. This is a serious accusation as studies have proven the vice as a key factor that supports illegal activities such as black markets, drugs trades, and even terrorist activities.

A new study from the research wing of Binance reveals that large scale Crypto investors prefer to store their Digital Assets in exchange-based custodial platforms rather than wallets as it is widely believed to be the case. This large scale Crypto hodlers are the whales who own the bulk of Digital Tokens and whose trading tendencies often create ripples in the market. For instance, late last month, there was a short term period of BTC/USD bear run as whales placed sell orders for a huge number of BTC tilting the Relative Strength Index (RSI) of Bitcoin to the overbought side. Therefore, the research findings indicate that Crypto exchanges are ideal for large scale Assets under Management [AuM] investors whose account books read at least $25 million in funds.