Even avid supporters of cryptocurrencies call them risky, making it no surprise that everyone is waiting for the next information tidbit for predicting crypto market trends. Currently, there is an approximately $400 range that Bitcoin is expected to hit. Depending on which direction the market goes will likely determine the next course of action for Bitcoin investors.

Presently, the Bitcoin market has reached a critical point. On the lower end is $6,341, the result of a double bottom neckline that was once the resistance level and now is the support. This resistance was scaled on June 30 and the price has gone up from there. At the higher end is a Fibonacci retracement that indicates the upper trading level at $6,754. All that is left to do now is wait to see which trend the Bitcoin value will follow.

What the Numbers Mean

According to the current stats available, if Bitcoin were to break above the higher number, it would signal that the move upward would continue—the cryptocurrency had reached its lowest point on June 24. Experts say that the bull frog breakout and the double bottom breakout that Bitcoin experienced the previous week would cause Bitcoin to continue its upward rise, with the potential of reaching as much as $7,000. 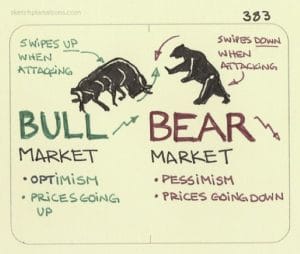 There are two popular analyses for the trends that Bitcoin seems to be following; either a bullish setup or a bearish set up. The following analysis is based on the 1-hour trading chart:

The case for a bull setup shows that if Bitcoin stabilizes before $6,341, the trading arena could face a downward trend. However, the longer that the coin continues to rise, the more likely that it is the bull setup will continue on a rising channel. In the last 24 hours, the coin has stabilized at an average of $6,520.

Should the price continue dropping, the case may be made for the bearish setup. The Bollinger Bands for the current market show a bearish setup because of the downward trends. This case is further made by the moving average, which is below 50-hour at some times and 100-hour at others. This indicates that the trend that will face the least resistance is downward.

If a 4-hour chart of today’s Bitcoin trends is analyzed, it makes a case for the bearish setup. There was a downside break in the rising channel, accompanied by bear-biased Bollinger Bands that are starting to fall.

Though the case for the downward trend in bear formation has been made, it is not a definite occurrence. There is still a chance that the trading value will increase. If the bull market were to break above the $6,754 mark, Bitcoin could easily break $7,000. Otherwise, a break toward the lower level of $6,341 would cause a downward trend that could continue until $6,000. This makes a fluctuation of just $400 critical in determining the future of the current rise or fall of the Bitcoin market.