Tether Will Launch On EOS

The CTO of Tether, Paolo Ardionio, has announced that Tether will launch on a new blockchain. Ardionio did originally not disclose on which blockchain Tether would launch. However, CCN found out that the blockchain will be EOS’ blockchain. Besides that, Tether is also coming to the Lightning Network by the end of this year.

. @Tether_to is launching on a new chain today. Any guess?
I believe that cross-chain support is a key element for the success of a stable-coin.

Afghanistan has been in an almost permanent state of war over the past few decades now. The political instability led to financial and economical instability as well. It is hard to maintain fundamental infrastructures that issue and maintain the financial circulation. A scenario in which cryptocurrencies could help perfectly. Read more about the insights of a US military officer stationed in Afghanistan.

The second largest cryptocurrency Ethereum has plunged recently during Bitcoin’s dip. Will Bitcoin now continue its previous run and outperform the altcoins? Or will Ethereum lead the Altcoin season. We took a look at Ethereum’s technical perspective. 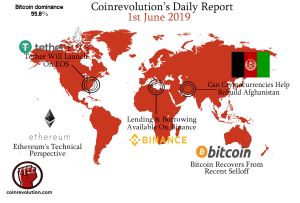 Bitcoin stopped dipping yesterday and regained about 3.5% for now. The price of Bitcoin” sits now at about $8590. This is a good sign for now. A support above the previously contested 7800 – 8000 line is established.

Cred, a San Francisco-based Cryptocurrency platform that offers lending and borrowing solutions, has partnered with Binance to offer its solutions. Consequently, Binance will no longer be a marketplace where buyers and sellers make orders but a fully-fledged ecosystem for Digital Assets’ transactions.

One thought on “Tether Will Launch On EOS, Bitcoin Recovers & more”