TrueUSD hit the crypto market just in March this year and is rapidly growing since then. Just yesterday the stablecoin broke through the market capitalization of $50m USD. As of now, it stands at $62 441 292 USD according to coinmarketcap.com.

The rumors and uncertainty around the currently biggest stablecoin Tether are widely known among cryptocurrency traders. Allegations of market manipulation in Bitcoin and other cryptocurrencies have further been nourished last week. A study suggested that Tether was in fact used to manipulate the market which led among other things to Bitcoin reaching its all-time high of $20,000 USD. Also, it is not known whether Tether’s quantity is really covered by the same amount of USD.
It seems that the project behind TrueUSD is deliberately taking advantage of Tether’s bad image. In its marketing campaign the trusttoken team stresses the words trust and truth. Furthermore, TrueUSD exchanges under the abbreviation TUSD, whereas Tether trades under USDT.

The use case of a stablecoin

Stablecoins are useful in bear markets and can be seen as a safe haven. They are bound to the price of another commodity like gold like Digix’ gold token DGX. Or in the case of Tether and TrueUSD to the value of a USD. This means that in long-term USDT and TUSD are subject to the same inflation rate as their fiat counterpart. But in short term they are useful to protect your investment from volatility and panic sells in the market. Therefore, it is highly useful to have a trustworthy stablecoin with a high volume. So far the volume of TrueUSD lies only at about $15m USD and can’t be compared to Tether’s almost $2.5bn USD. But the future of TUSD seems promising. In the last 24 hours more than 50% of the trading volume of TUSD came from the trading pair TUSD/USDT showing that a lot of investors see TUSD as a welcomed alternative to Tether. 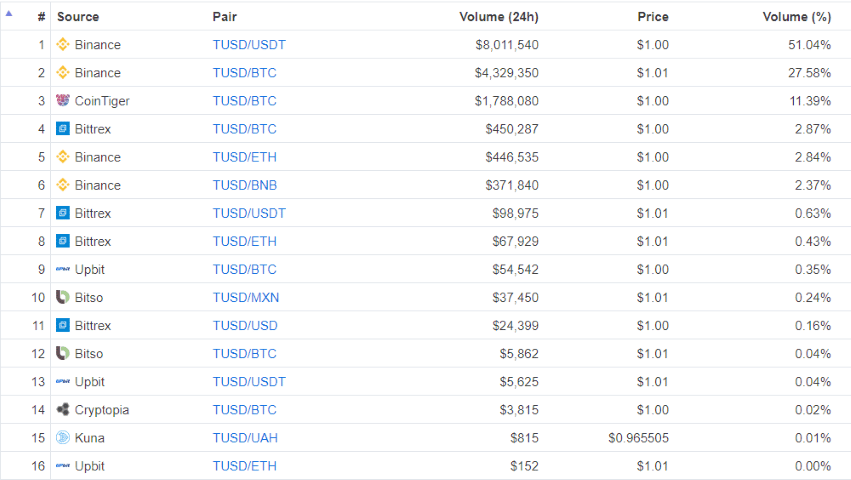 Just yesterday the team behind TUSD announced that they collected a sum of $20m USD in total by institutional investors. The project was thus backed by well-known names in the financial sector: Andreessen Horowitz, BlockTower Capital, Danhua Capital, Jump Capital, ZhenFund, Distributed Global, and GGV. The market capitalization of TUSD lies now above $60m USD in total.