As we have warned in our previous posts, Bitcoin has indeed fallen to a critical zone. At the moment the price is bouncing from our key resistance level at the range of 5900 – 6100 to about 6400. However, it seems very unlikely that we will reach previous heights from here on. Several indicators support that assumption. But we do not have only bad news.

The possibility that an outbreak happens from this point is there but it is small. Bitcoin is back in the downtrend channel and has hit the resistance for a fourth time. This gives us a bearish outlook for the next few weeks to months. We can see the gold chart as an example for that. Just this year gold has hit a key resistance for more than three times. A bearish signal that started a correction that is till going on.

However, daytraders can try to trade the pullback that already has begun. It should aim for the 6800 range where the chart would hit the most recent downtrend channel. After the pullback, we think a return to the resistance level at about 6000 is likely and from there on we should see lower levels for the first time since the bear market has begun. The question is how deep are these lows? 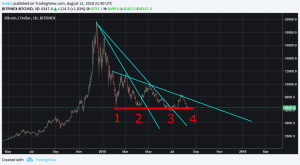 Where are we heading?

We do not have a lot of data that can tell us where Bitcoin is heading from here. But we can try to connect the recent bear market with the previous one which occured in 2015. This does not mean that we will return to the price from 3 years ago. Instead, we connect this low with all lows of the bull market since that time. This trendline gives us the idea of a “normal growth” chart of Bitcoin. It gives us the idea that the recent bull market has been in disparity with the regular growth of Bitcoin and that the recent bear market was necessary, therefore.

The normal growth chart of Bitcoin

The uptrend line that you can see above connects all lows that we have seen since the last bear market of Bitcoin. We can conclude with this normal growth line that Bitcoin still has to fall a bit lower from our recent levels to the range of about 4500 – 4600. It is significantly lower than our recent prices and we conclude that Altcoins will continue to bleed much harder than Bitcoin itself. It is, therefore, possible that Altcoins will fall deeper than their price was before the recent bear market. Seen from a yearly perspective, we can still say that Bitcoin is in a broader perspective still in a bull market. Entry levels should be the 4400 – 4800 level if we are right that the correction continues.

Read here why we think that the fundamentals are still positive for Bitcoin:

Why the Fundamentals for Crypto remain bullish