Last week we could announce that Bitcoin broke the latest and last downtrend channel. But just one week later we have to revisit this move on the chart. As Bitcoin fell to the 7000 level on Saturday and thus back into the downtrend channel. Bitcoin moved up for almost two weeks straight without any major correction. That the correction had to come at some point was clear. But the question that we have to pose now is whether this is a positive or negative correction. 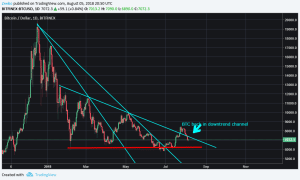 Fibonacci indicators do not indicate that this correction is too bad

The major drop occurred just on Saturday this weekend. This is an important note. Because weekend activity often does not represent the “real” chart in cryptocurrencies. Activities of bots and algorithms are much higher during the weekend. Especially on a hot summer day in August. Therefore, we have to wait for Monday and see where the price moves from there.

Judging from the Fibonacci indicators we do not have to conclude that this correction is significant right now. But we have to wait if Bitcoin can rise above the 0.5 level to 7150 and higher.  A correction to the 0.5 level seems perfectly normal and could pose a good start to a move higher. However, if Bitcoin sinks lower from here, we would soon move to the critical level of the resistance zone. As we have said now the last weeks, as long as we remain above the 6000 resistance level we remain bullish. But if we sink below it, we will likely see a deeper correction. So, once again do not panic sell and do not fomo-in either. Instead, react to how the markets will deal with this situation.

So we have several levels that we can focus on now and from which trades can be judged.

Downtrend channel – about 7300 (bullish sign if we break it again)

Fib 0.5 – at around 7100 (should be regained for further upwards movement)

If you’re not a day trader, we would recommend waiting until Bitcoin moves decisively out of this critical zone.

One thought on “Technical Analysis: CW #31 – Significant Correction? Watch out for these levels”