Now that the year is coming to an end, notable crypto exchanges have made a mark in the year. It is not only the established exchanges that have made marks. Some new ones have also done pretty well. The crypto-trading exchange game seems to be getting hotter day by day.

Topping the list is an Australian crypto exchange. The listing is made based on the adjusted volume and the reported volume. This new entry has taken over luminaries such as Coinbase and Binance.

TAGZ: The Largest Crypto Exchange At The Moment

Taking Down The Industry’s Bigwigs

There is something that is of great interest here. TAGZ Exchange has even taken down some of the leading crypto exchanges in the market. One of them is BitMEX, which is the largest BTC derivatives market. The latest crowning is based on the volume reported in the past 24-hours. TAGZ Exchange reported a volume of more than $3 billion. However, BitMEX is still at the second position with a volume of more than $1 billion.

TAGZ has also secured other positions. One of the positions is of the leading one when it comes to the volume in the last seven days. In the past seven days, TAGZ has recorded an incredible volume of more than $18 billion. It has claimed victory over BitMEX once again in this regard. At the moment, TAGZ has more than 465k users. In addition to that, it has also maintained the leading position for ten days now. 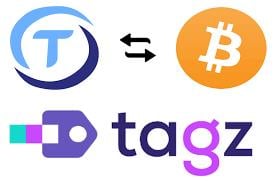 Questioning On The New Record’s Legitimacy

TAGZ’s rise to the top position has surprised many in the market. Some have even questioned the legitimacy of the numbers. The listing has been done by CMC. And CMC had been earlier accused of wash trading. However, CMC’s CEO has refuted all the claims. He has stated that there is no way the figures can be faked. TAGZ, however, is 100% regulated and licensed exchange. This is one of the reasons why TAGZ could have genuinely gained the numbers.

CMC has a great focus for the coming year. They want to increase the liquidity on the platform. This is expected to bring more traders on board. The firm is now working on releasing mobile apps for Android and iOS.