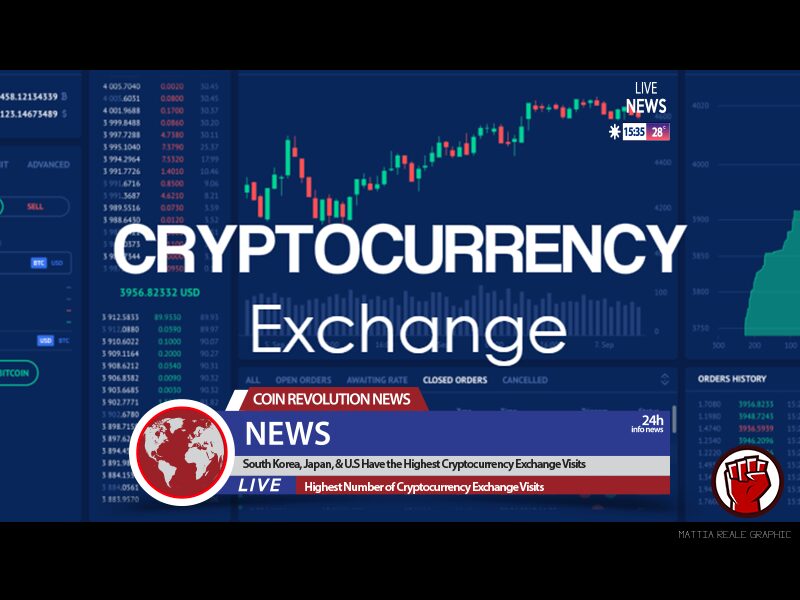 Cryptocurrency exchanges give investors an opportunity to trade their digital assets for new ones or for fiat currencies. The exchange platforms also make it possible for new investors who are interested in venturing in cryptocurrencies to purchase some using fiat currency.

All the transactions are done through a secure system that protects users from data theft and other related risks. However, recently, there has been an increase in number of cryptocurrency exchange hacks across the globe. The companies have since then put in place new measures to prevent similar incidents from recurring in the near future.

According to a recent report cited in a number of news websites, The United States has the highest number of people frequenting cryptocurrency exchanges. It is followed closely by Japan and South Korea respectively.

The research was done by one of the renowned analytics websites on the web today, DataLight and published the findings on April 29th. The United States alone has 22 million monthly visits to the 100 leading cryptocurrency exchange platforms based in different parts of the world.

The figures were calculated based on the most recent website traffic data from the said exchange platforms. One of the surprising facts about the United States cryptocurrency market is that despite; the fact that the country lacks sufficient cryptocurrency regulations, it still tops the region in terms of cryptocurrency trading.

On the other hand, Japan, which recognized cryptocurrencies such as bitcoin as a legal tender back in April 2017, recorded approximately 6.1 million monthly visits. This figure makes it one of the leady cryptocurrency countries in the world. The numbers are definitely one of the motivation factors that lure companies to set up camp in the country.

South Korea also boasts of a conducive cryptocurrency market that allows local and foreign companies that deal with cryptocurrencies to set up offices in the country. As mentioned earlier, South Korea has the third highest number of people visiting cryptocurrency exchange sites in the world. It is estimated that more than 5.7 million visits emanate from the country.

The United Kingdom is also a major player in the global cryptocurrency industry. The impressive statistics of 4 million monthly visits to exchanges is a clear indication of the fact that people are now more receptive to digital currencies than before.

Other countries in the top 10 list of countries with the highest monthly visit to cryptocurrency exchanges are Turkey, Brazil, Vietnam, Germany, and Canada.

Get daily cryptocurrency news here. Every article is 100% accurate and well-structured to help you get the message.