Bitcoin is slightly recovering despite the (short-term)  bad news of the SEC rejecting more ETFs. This week Bitcoin has broken the resistance of 6600 that held for more than two weeks. However, the price could not break out beyond the 0.382 Fibonacci. Currently, we are bouncing from the resistance and it looks like we are going to test the Fib level once again. The market currently seems to be undecided. On the fundamental analysis and in general, we are bullish on Bitcoin. However, short-term we still think that the continuation of the bear market is still likely. 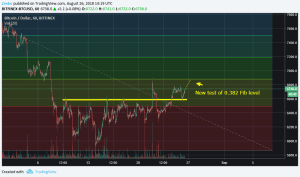 To break the recent trend Bitcoin needs to go well beyond the 7700 level from which we are still relatively far away. We already had one false break-out and touched the major resistance line at about 6000 USD more than three times now. It is after all the bigger trend that still is continuing and that started in February earlier this year. It is very well possible that we test the downtrend resistance in the next weeks. 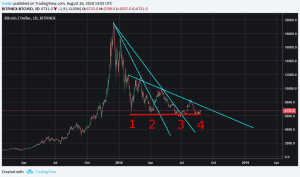 In any case, the majority of the Bitcoin traders seem to be bearish now. A good indicator that the bear market might be over soon.  However, there are some indicators that make us think that we have to go a little bit lower from here until major bull price action sets in. We are still in the downtrend channel, we touched the resistance line more than three times now. Plus, from the fundamental side, there is no major news that could change the sentiment. As the SEC already decided negatively on every small or big ETF decision. 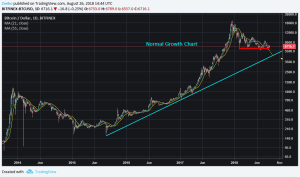 Therefore, we can establish several trading strategies. Short-term it is very well possible that we test the recent 0.382 Fib level and consequentially even the 0.5 Fib level at around 7200. From there on, the next significant level would be at 7750. The downtrend channel resistance. However, we see it as likely that Bitcoin returns to its “normal growth”. The chart states that Bitcoin would currently still be overvalued. The area 4400 – 4800 is a major supply line for us.