At the current market price of more than $10,000 according to Coinmarketcap data, Bitcoin is a popular Digital Asset that is highly sought after by risk-taking investors. For this reason, Bitcoin Samsung Technologies has incorporated Bitcoin functionality on their latest Phone brands that were released with a Blockchain-enabled operating software.

In the latest round of software upgrades, reports reveal that the tech giant upgraded the Samsung developer tool kit on the flagship S10 brands. Some of the brand models whose users will be able to transact mobile-based Bitcoin transactions including S10e, S10, S10+, and S10 5G.

Additionally, official reports reveal that other models such as Note10 and Note10+ will have their operating systems upgraded to support Bitcoin functionality as well.

Technical Aspects Of The Upgrade

First and foremost, it is critical to understand the function of the Samsung developer tool kit. This is an application that the South Korean tech giant developed to enable the Samsung S10 range of phones that were unveiled in March 2019 to connect to Blockchain ecosystems.

The design of the SDK allows the Samsung phones which operate on Android Operating systems to be in sync with Blockchain ecosystems, check the Keystore status, and sign Cryptocurrency transactions. Hence, the developers deployed the “Blockchain Keystore” that enables the S10 range to connect to Blockchain addresses.

In a flashback, the “Blockchain Keystore” was released on March 2019 with the launch of Samsung S10 range. It was meant for storing Cryptos and hosting transactions for ERC-20 tokens and ETH. However, the recent soft fork aims to incorporate Bitcoin transactions that had been left out.

Only A Limited Number Of Jurisdictions Will Enjoy The Service

The upgraded SDK is unfortunately not available on a global scale. The few countries that are covered by the service include the UK, US, Switzerland, South Korea, Spain, Germany, and Canada. It is yet to be confirmed whether more countries will be added in the list in the future, however, the impact of the service in the Crypto economy is expected to be immense as the industry is still in its infancy. 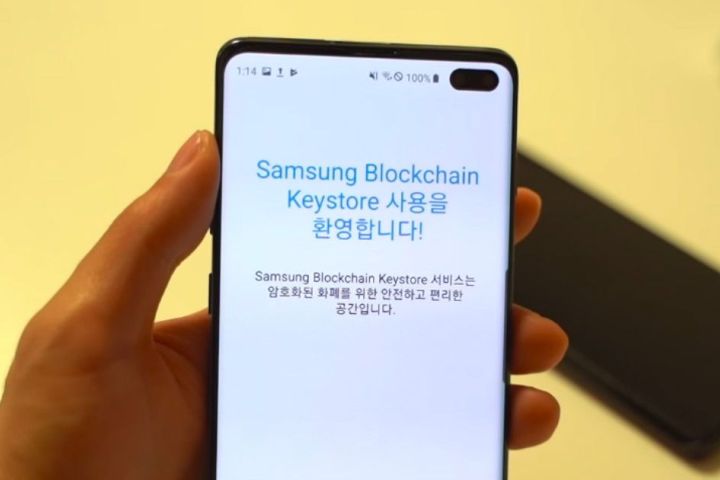 The soft upgrade on the SDK also supports the use of the Klaytn Blockchain Token which is known as the Klay Coin. This platform belongs to Korean messaging app giant Kakao that recently launched its next-level social media platform.

A week ago, Kakao’s Blockchain subsidiary GroundX tested a new wallet for Klay and this is expected to revolutionize the adoption of the Token. Additionally, the company has on-boarded a new partner for the decentralized app (Dapp) and the long term outlook of the Crypto’s deployments are positive.

Is Samsung Releasing Its Token?

In the meantime, the firm has hinted that it is exploring the options of developing a customized DLT system with a native Samsung Crypto. However, there is no official communication indicating the roadmap timelines for the projects.