The president of the BaFin (Germany’s financial authorities), Felix Hufeld, is critical of ICOs. He stated that investors have few rights and that many ICOs are untransparent. Investors could hardly research whether a legitimate business model backs an ICO or not. Even fraudulent schemes are hard to distinguish from those. Furthermore, Hufeld stated that the financial markets need regulation on  a European level or even better on a global level.

Quorum, JP Morgan’s private blockchain, finds application in the tokenization of physical assets like gold, real estate or art. This way, ownership of an asset is easily fractionalized. Basically, this is nothing new and nothing that other blockchains like Ethereum could do as well. In fact, crypto projects like Digix Gold or Modum are already doing the same thing on the Ethereum blockchain. However, Quorum is still innovating the industry as it is one of the largest banks in the world. Claims of JP Morgan representatives that Quorum is decentralized are, however, wrong.

The overall market capitalization has lost over $9 billion USD yesterday. However, the market cap stays so far well above $200 billion USD ($203bn). The dump concerns both Bitcoin and most of the relevant Altcoins. As a consequence, the Bitcoin dominance has slightly risen by 0.4% to 54.2%. The Bitcoin price stays as well above the major resistance at $6000 USD. 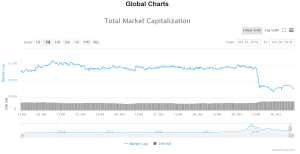