During the Breaking Bitcoin conference in Amsterdam from the 8th to the 9th of June Charles Guillemet, CSO de Ledger, has revealed several vulnerabilties in several hardware wallets. It concerns the wallets Trezor One, Trezor T, Ellipal, Keepkey et le smartphone HTC Exodus. A technical team of Ledger was able to extract the password from these wallets. Some of the vulnerabilties can be fixed but others cannot. Hackers could even exploit the vulnerability of the HTC model Exodus from distance. 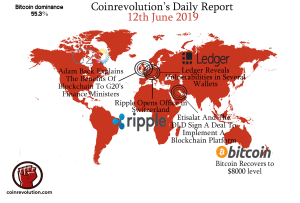 According to a UAE based news outlet, the Gulf Today, the Dubai Real Estate sector is slated for a major shakeup following the signing of a deal between a local telecom’s giant- Etisalat- and the Dubai Land Department (DLD). The two sides have signed a memorandum of understanding to implement a Blockchain project for the real estate sector in the resource-rich emirate. The local market is best known for its iconic real estate masterpieces such as the Burj Al Arab Jumeirah, the Burj Khalifa, to name just but a few.

The price of Bitcoin has surged in the last few hours above the $8000 level. It is a key level currently that bulls and bears fight for for several weeks now. Although we were more bearish in our last technical analysis, the market seems still undecided by now.

In a meeting for finance ministers from the G20 members, Adam Back-a Blockchain evangelist- explained the benefits of Blockchain as reported by Cointelegraph Japan in the weekend edition. The significance of his speech cannot be overstated as Back, who is also the inventor of the hashcash proof-of-work system, took the opportunity to sensitize the global finance leaders of the world’s richest countries about the positive use cases of Blockchain technology. The gathering that Back addressed also included Central Bank governors who play a crucial role in advising governments about the risks and benefits of Cryptocurrencies in their respective national economies. Most importantly, Adam Back is one of the most experienced experts on Digital Tokens and the Digital Economy as he was one of the first users of Bitcoin.