According to MarketWatch in a report released on July 11, Blockchain will cause gains of $1 billion in the telecoms industry. The research-based report forecasts that this will happen over the next five years, by 2023. This news comes after a 132-page report was released by Research and Markets, a global market research store, who performed an analysis of Blockchain in telecommunications. The detailed report analyzes factors like the views of the public and various financial sectors, as well as application of Blockchain as a means of increasing security in many industries—particularly the telecoms sector.

What Does Blockchain Do in the Telecommunication Industry?

Among the primary reasons for the development of Blockchain technology was to create an added level of security when performing transactions on the Internet. The telecoms industry has recently started undergoing changes in their security utilizing Blockchain technology. Often, this includes business support systems and operations support systems. This is stated clearly in the abstract of the report, which says:

“The blockchain in telecom market is driven by various factors, such as the increasing support for OSS/BSS [operations support systems/ business support systems] processes and rising security concerns among telcoms.” 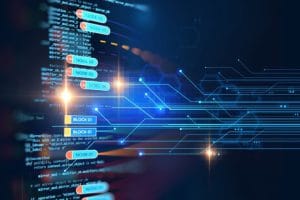 The five-year span that was detailed in the report was from 2018 to 2023. Between these five years, it is expected that blockchain technology in the telecoms market alone will see a drastic increase from $46.6 million to just under $1 billion.

Even though digitizing records has obvious benefits, it also had the high risk of being infiltrated by hackers. Eventually, security systems became more advanced, making it more and more difficult for hackers to access sensitive data. Unfortunately, hackers also increased their knowledge and worked quickly to learn how to access these newly stored files.

The one downfall of these traditional security systems was that they use a single, centralized location that was used to store the information. If the hackers could infiltrate this, they could access anything.

Blockchain technology comes into play because it separates this information by creating ‘blocks’ of data. These offer a limited picture of the entire data, so it is not useful for hackers. These blocks are arranged in chains, each of them being encrypted in a unique way so it becomes virtually impossible for the information to be infiltrated by people without the code. One of the most talked about blockchain uses is the cryptocurrency sector.

What Does This Mean for Bitcoin and Other Cryptocurrencies?

While Blockchain in telecommunications is a much different segment than cryptocurrency, this increased value in the telecoms market could indicate reaffirmation of the public’s faith in the capabilities of Blockchain. The increase in the Bitcoin market that started in the beginning of July also shows promise for the crypto market, indicating that it will continue on its upward climb to increased value.