In August of last year, the US National Security Agency (NSA) was hacked by a dark web group calling themselves Shadow Brokers. The criminals accessed hacking tools and leaked them online. Cybercriminals then started using them to access private computers giving rise to a new crime referred to as Crypto jacking. This is a technique where criminals access computers and steal the processing power to mine cryptocurrencies. 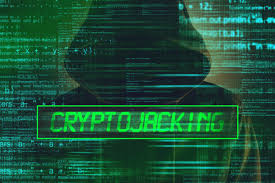 The Hacking Tools Are A Major Concern

According to the Cyber Threat Alliance – a leading association of cybersecurity experts and firms, one of the most notorious hacking tools that cybercriminals have access to is the ‘EternalBlue’ software. This app has been a major contributor to the quadrupling of Crypto jacking in last year alone. This specific app was developed to spy on gadgets such as laptops, smartphones, and tablet in a counter-terror initiative by the NSA.

In addition to targeting cyber to mine Cryptocurrencies, some of the intentions have been malicious with the most infamous WannaCry ransomware attacks in 2017 that affected 150 countries and infected 200,000 computers.

As per a report, there was 459% of incidences of Crypto jacking. This coincides with the growing popularity of Cryptocurrencies such as Bitcoin, Monero, and others. In the legitimate perspective, Crypto mining is very expensive as it requires investments in powerful computers.

However, the EternalBlue malware enables the miners to link hundreds of thousands of processors into their end to solve the Blockchain computing problems that process transactions, verify the users, and issue Cryptocurrencies as a proof or work/proof of authority or any other on-platform activity. In return, the hackers save a lot of money and earn huge profits when they exchange their digital assets for fiat money or simply hold onto them as they speculate for a price surge.

Despite the huge prices that Bitcoin fetches in Crypto exchange markets, the hackers prefer to mine Monero. Researchers say that 8% mine Bitcoin versus 85% who mine Monero. Factors that contribute to this trend are anonymity and privacy. Bitcoin has semi-anonymity features and transactions can be traced. For instance, Bitcoin address and values are in the public ledger. Monero, on the other hand, has absolute privacy features a factor that cyber jackers deem to be essential.

One of the most obvious signs is when a computer, smartphone or tablet slows down despite having a free RAM. If this happens, it is advisable to back up the files on the computer, delete the browser, and overhaul the operating system. Additionally, you have to install new security features on all apps and the device to ensure that the hacker cannot access the device. It is also advisable to update Anti Spy apps to detect the malware.

Securing The Blockchain Is A Collective Initiative

Detecting and preventing Crypto jacking is everyone’s duty as Blockchains are open sourced networks and managed from an individual’s end. Ensuring that all Cryptocurrencies are legitimate can play a critical role in making Crypto’s acceptable to the mainstream world.