Plus Token, an investment and alleged payment platform faces fraud accusations. The money that people invested in the scam amounts to roughly 3 billion USD. Plus Token also targeted many investors from the US and from Europe. The service comes from South Korea and clients promoted the project more and more aggressively in the past month. Plus Token promised a monthly return of 8% – 16%. An unrealistic promise that we have warned about earlier. Supposedly, Plus Token is just undergoing a maintenance of its wallets. However, wallets are now inaccessible since the beginning of this week. 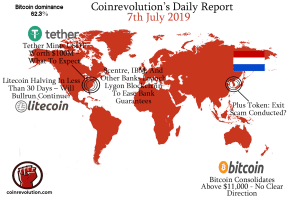 Litecoin Halving In Less Than 30 Days – Will Bullrun Continue?

Litecoin has performed well as the halving is closing in. Litecoin surged from less than 70 USD in April to now more than 120 USD representing roughly a 71% surge. The fundamentals continue to look good as the halving closes in and is now less than 30 days away.

Leading banks such as Westpac, Scentre Group, Commonwealth Bank, IBM, and ANZ have partnered to jointly deploy a revolutionary platform named Lygon Blockchain.
The platform is being developed in Australia, according to Nigel Dobson, the ANZ Banking Services official.
The live Lygon Blockchain is in its pilot phase that runs for 8 weeks starting July 3 where a test group of retail lease customers will be allowed to participate. Eventually, the trial will be followed by the release of the platform for industry adoption. The aim of the platform is to manage bank guarantees for enterprises and other clients.

Tether Mints USDT Worth $100M – What To Expect

Tether (USDT) has added new Tokens valued at $100 million. The USDT Coins were printed on the Ethereum Blockchain marking an important step in its roadmap of releasing more Digital Coins for mass adoption. Official reports indicate that the newly minted Coins have been transferred to Tether’s treasury address ahead of transfer to USDT users and investors. Tether platform offers the world’s most popular Stablecoin (USDT) and experts believe that the minting of the Digital Coins towards the end of the week is strategic as most investors trade on weekends.