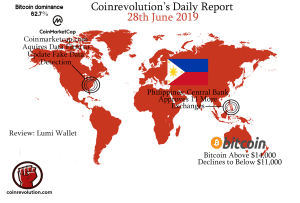 Coinmarketcap.com (CMC) has announced on Wednesday that it aquired the data firm Hashtag capital. With this aquisition, CMC hopes to innovate its technology to detect manipulated data from exchanges. The site has been criticized for a long time now to represent faked and manipulated data in an unreflected manner for quite a while now. The step is CMC’s very first acquistion of another company. The company did not disclose the price for Hashtag Capital.

Bitcoin has reached a price level that it did not since the bull run of 2017. But the price of Bitcoin remains typically volatile. However, the last price action does seem a bit extreme: Bitcoin reached the $14,000 level and declined to below $11,000 in less than 24 hours. There are many speculations as to why this is happening. Many people in the crypto space suspect that Tether continues to manipulate the price. However, since breaking above the $10,000 level an unpredictable FOMO has set in. While it currently looks like Bitcoin will recover and possibly reach even higher than before, we have warned in our last technical analysis that much more severe declines could be possible.

Lumi Wallet is a crypto wallet that has been designed with an in-built exchange offering support to some of the leading crypto tokens and coins. Lumi Wallet has a nice design as well as a simple interface that can be used by all. It also incorporates a high level of anonymity and security. The wallet works best for both the advanced users and beginners.