The Banking sector’s future could be on Permissioned Blockchain following an increase in the adoption of the technology.

The Permissioned Ethereum Blockchain is one of the platforms that is set to benefit from the changing trends because of its Smart Contract feature that is in high demand.

This observation is being made by the senior advisor for Blockchain studies at the MIT Digital Currency Initiative, and the chairman of CoinDesk’s advisory board, Michael J. Casey.

The Societe Generale Investment Bank issued a $112 million bond that has been modeled like a Security Token where the bank is both the issuer and sole investor.

The relevance of the bond issuance is that it uses Smart Contracts on a public, permissionless Ethereum Blockchain and not the private, Ethereum permissioned Blockchain.

This is quite revolutionary for the banking industry as it has for long been believed that private, permissioned versions of DLT are the only option for bankers. This is due to the fact that compliance rules such as know-your-customer (KYC), anti-money laundering (AML), and more standards can only be decisively enforced in a permissioned Blockchain.

Nonetheless, the World’s 19th largest bank is experimenting on a permissionless version of the Ethereum technology. This is signifying that the use of public Blockchains on banking networks could soon be a reality for many banks, should the Societe Generale trial prove to be feasible.

Looking At The Future Of Banking

It is a no brainer that the Societe Generale is alive to the fact that its peers in the industry are skeptical of the public protocols in DLT. However, the French bank seems to be acknowledging the fact that this disruptive technology could also present an opportunity for the growth of the bank.

Hence, by embracing the public Ethereum Blockchain, the bank is setting itself up to be at the right side of history should the future evolution of digital finance favor the public versions of Blockchain. 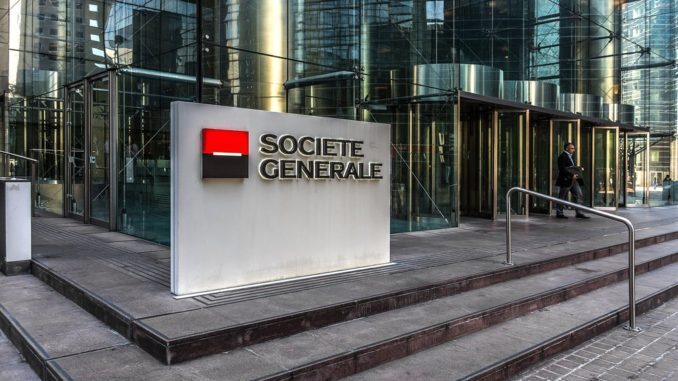 It Has Happened Before In The 90s

In the evolution of the internet in the 90s, closed, walled-garden, and private Intranets such as AOL, Prodigy, and France’s Minitel were believed to be the ideal technology for enterprise use. However, towards the end of the decade, open, public, and interoperable internet networks emerged as the ideal architecture for information sharing.

This transformation was inspired by the fact that the public internet imposed no limit on the scalability of the network where a pool of talent could brainstorm ideas and contribute to the development of the platform.

In the same way, history might repeat itself and public Blockchains could emerge as the go-to technologies for firms in the banking sector and beyond.

Additionally, some experts are arguing that a permissionless Blockchain in the banking industry could remove the barriers to financial inclusion and allow more people to be banked.

Will The Regulators Approve The Bonds?

The bonds that the bank has issued are securitized by a particular balance sheet. This means that upon their maturity in five years, future owners will have equal exposure to risk and ranking.

Meanwhile, it remains to be seen what the regulators will say about the new type of Security Token bonds issued on a public Ethereum Blockchain.