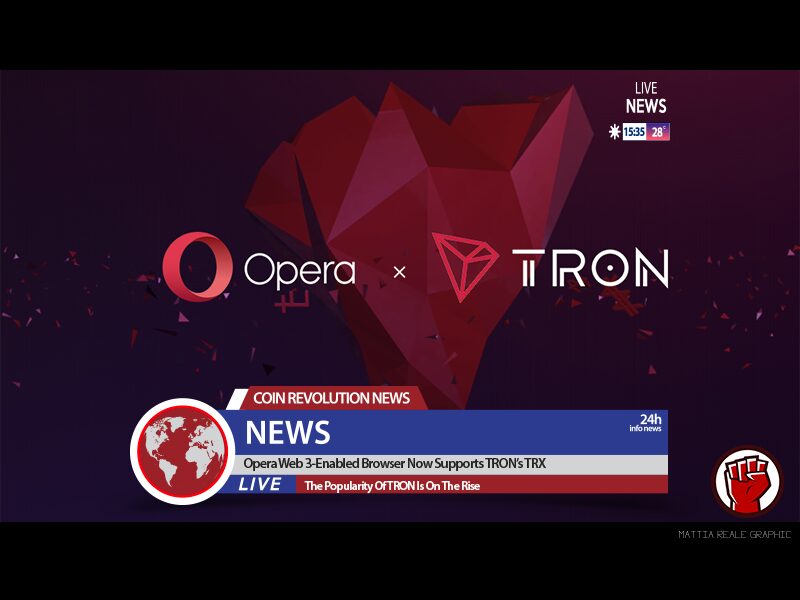 Opera is the first browser that has web 3 and Crypto wallet support. According to an official announcement, Opera is set to add the support of TRX on its hot wallet in the near future as its web 3 seeks to incorporate the support of TRON Blockchain.

The significance of the added support is that the users of the Opera browser will be able to buy, send, and store TRX easily and in real time. Additionally, the Opera users whose number is about 300 million will be able to access TRON dApps and play TRON games without having to leave Opera.

Further, the users will also be able to acquire TRX and enjoy TRON thriller games and dApps because of the wallet’s TRX inclusion.

The upgraded Opera browser has a user-friendly and a more inclusive Web 3-supporting interface that does not require the integration of third-party wallet applications or browser extensions that slow down the speed of browsers.

The Popularity Of TRON Is On The Rise

The integration of TRX to the Opera crypto wallet is not a coincidence but a business decision that aims to tap into the growing adoption of TRON. The Head of Browsers at Opera, Krystian Kolondra, notes that TRON Blockchain has grown tremendously in popularity due to its fast-changing ecosystem.

Krystian also agrees that Opera browser’s initiatives of supporting the web 3 will contribute immensely to the realization of mass adoption of Blockchain and Cryptos.

On TRON’s perspective CEO Justin Sun is excited seeing that the “hundreds of millions” of users of TRX and other TRON Tokens will be able to effortlessly access dApps that TRON Blockchain proffers.

Blockchain-Based Internet Is The Future Of Browsing

Technology is always evolving and what has been perfect always tends to be made better as more research yields better frameworks of upgrading traditional technology.

In the perspective of the internet, research and technology changes are leading to the emergence of Blockchain-based internet also known as web 3. This technology is futuristic and Opera is focusing on offering a browsing platform that provides access to web 3 applications and the myriads of benefits that it proffers.

Opera Is Setting The Example For Google, Yahoo, Mozilla, Torch, And Other Browsers

From December 2018, Opera started supporting web 3 operations by deploying its native Crypto wallet for Ethereum-based Tokens. The significance of the new feature on the browser is that; for the first time, mobile-based users could access their ERC-20 Cryptos on Android devices securely.

Another build of the Crypto wallet was released in April this year for Opera’s PC browser. This means that Opera web 3 solutions are available for Android smartphone and tablet users as well as PCs. Further, an iOS version is in its trial stage and Apple users will be able to have their own Opera browser Cryptos in late 2019.

Moreover, towards the end of 2018, TRON launched Arcade-a project that offers a $100 million fund to facilitate game software research and development. This has led to the development of more than 400 dApps on TRON Blockchain according to dappreview powered by 2.7 million TRX accounts.