No, Fiat Money is Not a Reliable Unit of Account A major argument why cryptocurrencies will supposedly find no significant adoption is that the overall economy, state institutions, companies, and banks need a reliable unit of account. The argument is an extension of the point that cryptocurrencies are too volatile to be adopted. However, the reality shows that people all over the world adopt cryptocurrencies and use it in their everyday life despite the volatility. Therefore, Bitcoin’s critics had to modify this argument. A seemingly valid argument is the claim that we display prices whether of gold, Bitcoin or any other assets that potentially qualify as money in Dollar, Euro, Yen etc.

Who doesn’t know the cluelessness that we have when a history book mentions the price of something or the wealth of a particular person in a historic currency. We absolutely have no imagination what these units mean today. Even if the value is displayed in Dollars of the early 20th century we usually only know that one Dollar was worth much more than the Dollar is today. In fact, one million USD in 1918 is the equivalent of 18 million USD in 2018. In between, generations have been robbed of their hard earned money through creeping inflation. Over decades people always had and still have to adjust their data due to inflation. But lately, they should also do that when indicating money amounts over short-term. 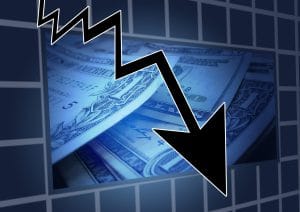 The fiat money system led to many distortions lately. The inflation rate is ahistorically high. Governments and Central Banks try to conceal this fact by tinkering with the data. They do so by equating the inflation rate with the consumer’s price index. A set of data that anyone can easily manipulate just by choosing the goods that serve as a basis for the index. Your own personal index could very well be higher or lower than the index depending on if you drive a car or not for example. Certain goods will sink in their price due to other factors than inflation/deflation, e.g. getting rid of trade barriers.

A more reliable approach is, therefore, to subtract the increase of the money amount M3 with the increase of the GDP. This leads to an inflation rate of 2.44% using the data of Statista and of the Federal Bank of St. Louis. This is a bit higher than the consumer price index.

Over the course of 5 years such an inflation rate of 2.44% leads to a devaluation of 11,36%. $1000 USD today would be worth the equivalent of $1128,10 USD in five years. A fact that definitely requires inflation adjustment. A truly reliable unit of account looks different. And if we would use the Euro for these calculations the result would be even worse.

The Fiat Money System is Based on Force, Violence and Oppression

But the argument focuses mainly on the volatility of Bitcoin and gold. But the volatility of the Dollar and especially the Euro have been unusually high in recent years as well. The Euro shakes with every little state that struggles with its financial stability. Or when states like the UK or Italy try to leave the Union. The USA has made every country pay that tries to abandon the US-Dollar as a reserve currency. Either with sanctions (Iran, Russia), trade barriers (China) or outright war (Syria, Lybia, Iraq). And for good reason. The US empire relies on the world accepting the US Dollar as a trading unit. The Dollar as a reserve currency and a universal unit of account relies on force and violence. Without the Dollar empire would crumble. Historically, gold has been the universal unit of account across many civilized cultures throughout the centuries. That is why people implemented a gold standard. John Stuart Mill noted in 1848 in his book Political Economy:

“[O]n the whole, no commodities are so little exposed [as gold and silver] to causes of variation. They fluctuate less than almost any other things in their cost of production. And from their durability, the total quantity in existence is at all times so great in proportion to the annual supply, that the effect on value even of a change in the cost of production is not sudden; a very long time being required to diminish materially the quantity in existence, and even to increase it greatly not being a rapid process. Gold and silver, therefore, are more fit than any other commodity to be the subject of engagements for receiving or paying a given quantity at some distant period.”

How the Fiat Money System is Responsible for Volatility in Gold

Only lately has gold become rather volatile. Not as it is its nature as Mill’s statement shows but precisely because of the rise of fiat money. Gold became volatile in waves. Still, during the early 20th century, the price of gold was comparably stable even throughout the first world war. It had a price of around $20 USD. Only in the 30s and 40s due to the economic recession and the second world war began the price of gold to rally heavily to the $30s range. The gold standard system began to crumble after the second world war which led to further rallies. First to $40 in 1971 and then to $150 by 1974 already. The price increase reached its maximum in 1980 at $600 for the first time. After that the price decreased again to the $300s range. In 2001 the price declined for the first time after several decades below the $300 level.

It is time to Strive for Monetary Independence

However, the creation of the Euro and the turbulent distortions that the fiat money system has created since then led to another crazy price rally in gold by more than 300%. Currently, the price sits at $1200. Defenders of the fiat money system want to tell you that gold is not a reliable asset and too volatile to qualify as money and a unit of account. However, their own unreliable monetary policies are precisely the reason that an asset like gold undergoes such heavy turbulences. And gold is not the only asset that does so which leads to harmful and unexpected developments in the market. Satoshi has subtly criticized the fiat money system for this with his first message that he left on the Bitcoin blockchain.

We rely on the Dollar, Euro and other Fiat currencies as unit of account out of either habitude or force. But to believe in Dollar or Euro due to its stability is an expensive illusion. Bitcoin has opened the gateway to a more democratic, responsible and fair monetary system.

One thought on “No, Fiat Money is Not a Reliable Unit of Account”