Just like in Bitcoin, the fundamentals for Litecoin look good. The Hashrate recently reached and ATH in both SHA-256 coins. However, Bitcoin’s halving is still several months away, while Litecoin’s halving will happen now in less than 60 days. On the 6th of August the halving will happen, meaning that the block reward will halve from 25 LTC to 12.5 LTC per block. The price surged in the last 24 hours by nearly 10% from $102 to $113. 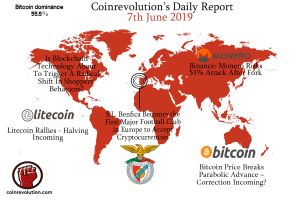 The latest Binance report suggests that the last hardfork of Monero might have missed its actual target. The report states that ASIC miners were successfully excluded from mining Monero. However, the actual goal which was to raise mining profitability and the amount of regular miners (from the community) was only slightly fulfilled. In return for this, the risk of a 51% attack is now higher. According to Binance, “the hashrate dropped by more than -70%”.

Bitcoin has advanced parabolically in the last weeks. Now the first major breakdown seems to have set in. A break of the parabolic movement is what started the last bear market. Of course, the parabolic advance was not as extreme as the last major bullrun in the second half of 2017. But despite the price of Bitcoin recently recovering to the $8000 a sell-off is not unlikely as we analyzed here.