Since the launch of the first ICO in 2013, this funding method has only been becoming more popular. Last year, around $5.3 billion was raised in hundreds of ICOs that were conducted. This is a demonstration of the potential of this funding method in assisting funds to meet their financial obligations. However, due to increasing cases of fraud through ICOs, regulators worldwide are trying to put in place the necessary legal requirements. Here is a comparison between ICO and venture capital.

Almost everyone can be an ICO investor as long as they have an Internet connection and can acquire major Cryptocurrencies such as Bitcoin (BTC) and Ethereum (ETH). Geographical location is not a barrier with ICOs. As long as your idea is attractive, you even don’t need a working product to attract investors. ICO investment is open to both experienced and inexperienced investors.

VC investors, on the other hand, are experienced individuals. Given that they are in demand, you need to be really convincing to with their hearts. Apart from a superb idea, you need to have a clear demo, a content-rich white paper, a well-prepared pitch, and a detailed roadmap. Be ready to provide concrete answers when dealing with venture capitalists. One major benefit of relying on these investors is that they are not after quick money and will stick with you for a long time. 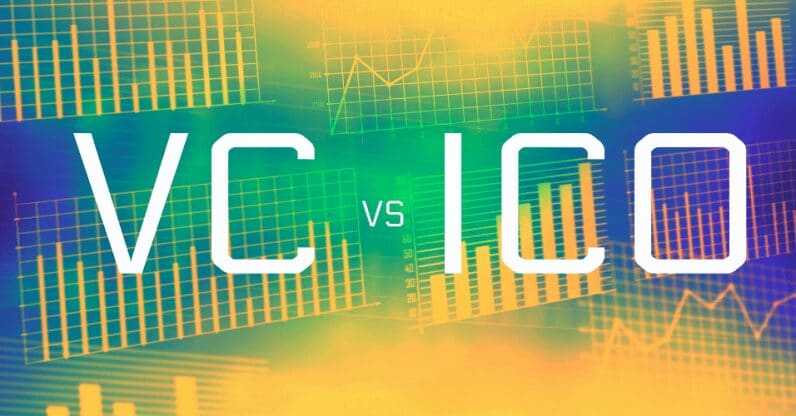 As mentioned, ICOs are accessible from almost everywhere as long as there is an Internet connection. The investors also don’t care about the location of the company offering the ICO and will only consider whether the value of the tokens will appreciate. ICOs make it possible for investors and project leaders from anywhere in the world to do business together.

VC investors strongly prefer local-based companies. This reduces their need to understand different markets in terms of competition and regulations. Given that this funding method may involve various meetings and signing of several papers, geographical location is an important consideration. VC companies have recently been targeting the Crypto sector to enjoy some of these benefits.

ICO investors rarely offer anything apart from their investment. Such investors are only hopeful that the ICO tokens will appreciate with time allowing them to make profits when they sell them later. ICO investors mostly look for a great idea that they think will be attractive once the project is launched. When you feel that your project does not need influential individuals, an ICO could be the best option.

On top of funding, VC provides startups with various valuable things. Given that venture capitalists are experienced individuals, they provide the startups with scalability, business guidelines, and consulting. Moreover, they also provide a connection which is essential in enhancing the adoption of the new business by established firms.

In case of an ICO, your project must be a success to command respect. Given that people are investing in a project because they believe in your idea, they may lose trust in you if it fails. You are likely to be considered a scammer if anything goes wrong with your project. In such circumstances, you will be left alone, blacklisted, and the chances of coming back will be near zero.

Raising funds from VC is enough indicator that your project is great. This is because of the vast experience of VC investors and the scrutiny that is involved. Venture capitalists invest in your project because they believe it will give value. They will spend a long time in your project and will even share fault when the project fails. There are chances of getting back even after failing in the first attempt as long as you can convince your potential investors.

During an ICO, the entrepreneur decides the distribution of the coins and the dates. No significant strings attached in an ICO. The project leaders do not surrender any part of the company allowing them to maintain 100 percent control of the business. ICO token buyers have no voting rights and have no say in the management of the company.

VC is a legal contract and is composed of other preparatory activities that take some time. You will not secure VC funding until you surrender 20%-30% stake in your business. This gives the venture capitalists a say in the daily management of the company. You have to consult them when making major decisions. Furthermore, negotiations about the market valuation of your firm are common.

The entrepreneur’s main responsibility when raising capital through ICO or venture capital is to win the trust of the investors. You must have an idea that is strong enough to convince the investors to put funds in your project. The more appealing your idea is to the potential investors, the shorter the amount of time you will spend finding investors.

Although ICOs have overtaken VCs in terms of the amounts raised by startups, it is still early to write off VCs. The increased regulation in the Crypto sector in different markets is expected to affect the market although only time will tell by how much. ICOs have disrupted investment and provided an effective way of raising capital. However, a lack of clear regulation may keep many potential investors from joining the sector.