Stablecoins that are backed with fiat money have many disadvantages. First of all, they are highly centralized. Thus, they require a lot of trust as Tether and Bitfinex have proven for a long time now. Ultimately, they defeat the purpose for which Satoshi Nakamoto created Bitcoin. His first message on the Bitcoin blockchain reads: “the Times 03/jan/2009 chancellor on brink of second bailout for banks.”

A subtle hint from Nakamoto that he created Bitcoin to challenge the money monopoly of fiat currencies in general. Not to make Fiat money transactions faster or more cost-efficient. However, the need for stablecoins is obvious in practice as many traders use stablecoins to escape risky market situations. Therefore, entrepreneurs came up with the concept of collateral stablecoins.

The concept of a collateral stablecoin is in theory easy. If prices fall the supply has to contract to create a scarcity of the coin. Consequentially, if prices surge the supply has to rise as well. However, the complexity of this is that markets decide the price of any asset. So how to gain control over this market?

The expansion of supply is rather easy to manage. As you can simply “print” more of a coin. A standard practice in fiat money and in Tether & Co. as well. The problem is how to diminish the supply. Collateral stablecoins try to achieve this by relying on a second token or coin. The collateral coin so to say. It serves to reward miners. 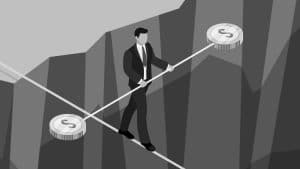 However, the success of the project much more than in any other cryptocurrency depends on the adoption of the stablecoin. That is the actual usage and constant transaction of the coin. As without them, the miners are not rewarded and the institution behind the stabelcoin doesn’t have the means to control the supply.

The stability of such stablecoins is, so far, a theorethical stability. It is likely that it will prove to be a relative stability in practice. You can also argue that collateral stablecoins are not really decentralized. It is theoretically possible to let smart contracts control the supply of the stablecoins. However, these smart contracts would be bound to specific market places. Then the decentralization of the project depends at least partly on the structure of these market places. Another possible centralization is the use-case of a collateralized stablecoin. Does a central institution control the use-case or does the coin depend on that institution to have its use-case at all?

Still, collateral stablecoins are an interesting approach to say the least and it will be interesting to see how they develop in practice.