Users on Twitter and Reddit have posted forms or emails by Bittrex and Bitfinex in which they are asked to submit further personal information about themselves. This step follows after both exchanges – unrelated to each other – are currently in law suit cases about unlawfully servicing customers from North Korea & Iran (Bittrex) and in New York (Bitfinex). Bitfinex is also suspected of intermingling userfunds with their own funds to cover the loss of $850 million.

The city of Fuzhou in China incentivizes company to settle down. The incentive consists of rent subsidies of up to 600,000 yuan ($86.673) per year for up to three years. Further subsidies are possible for outstanding achievements in technology or science or for general development costs.

The decentralized exchange Nash is about to release its beta version. The goal of Nash is to create a decentralized trade of cryptocurrencies. In prior funding rounds the project could collect $12.25 Million from early investors and further $25 million from an offering managed by an investing company from Liechtenstein. Only carefully selected users could test the alpha version of Nash. But the Beta-version is much awaited. 50,000 users have downloaded the browser extension of Nash that will include wallets, payment functionality and the support of dApps. Nash promises to be secure, easy-to-use and useful. 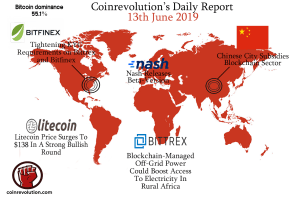 According to Thomas Wolfgang Thurner, a researcher in the Cape Peninsula University of Technology, one of the growing numbers of Blockchain use cases could be the management of off-grid renewable power in Africa. The researcher believes that a project that implements Blockchain technology in the management of off-grid renewable energy could boost access to electricity in rural Africa.

Litecoin (LTC), is one of the most bullish Cryptocurrencies in the market right now after gaining over 9% in the last 24 hours to peak at $138 as at press time. This growth comes after a sharp decline that LTC/USD experienced between May 29 and June 4 and when the coin price dipped from $122 to $98. However, a 30% upsurge of LTC ensued and Litecoin becomes the 4th largest Cryptocurrency on Coinmarketcap. The biggest question among Litecoin investors is whether the current price momentum is sustainable in the long term for LTC/USD pair to surpass XRP and ETH Tokens which are the largest Altcoins in ascending order.