Miners To Face Powercuts in Iran

The latest country that became attractive for cryptocurrency miners in the past year has been Iran. The average price per kw/h had been $0.03 for the past year. Which is significantly lower than other countries that have a significant mining industry (USA $0.12, China $0.08 – 2018) However, the state-run power company Tavanir cites a 7% increase in energy prices since last year. The main reason: cryptocurrency miners. As a consequence of this, Tavanir has announced that it is going to cut power supply to cryptocurrency miners. The state subsidizes the energy in the country. Another important reason for higher energy prices in the country are, however, water shortages. About a year ago, Iran experienced power shortages due to drought. 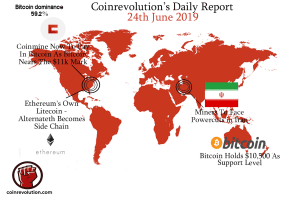 Ethereum is about to get a side chain with Alternateth. It is going to serve as a test environment for updates before they are going live on the main chain of ETH. James Hancock, project team lead of ETHSignals directs the project. He explicitly stated that he did not conceive the project as competition for the main chain but to support and compliment ETH. The two chains would be comparable to BTC and LTC.

Bitcoin has tested the $11,000 level two times now since breaking above the psychological $10,000 level on Friday. More important than fast gains are, however, strong support levels. Bitcoin currently seems to respect the $10,500 – 10,600 level as a local bottom. A fact that lets Bitcoin sit on the upside of the recent trend at this point. As of writing this, the price of Bitcoin sits at $10875. Interestingly, the Bitcoin dominance rose by 1.3% from Saturday on from 57.9 to 59.2%.

Coinmine will now be paying users in Bitcoin. Coinmine is a cryptocurrency mining device that targets the hobbyist market. Coinmine managed to mine Ethereum, grin, zcash, and monero from the moment it was launched. This is a group of cryptocurrencies that were not difficult to mine, thus they enabled the miner to earn a small return. With the bitcoin payments, miners have the motivation to buy the mining hardware which costs $799 or $699 with a bitcoin discount.