The crypto exchange Kraken has collected 13 million US-Dollar in a recent funding round. Six million were already collected on the first day of the funding round. Currently, Kraken aims to expand its service to other countries. The exchange had acquired the British Investment Company “Crypto Facilities” which had access to the European market. 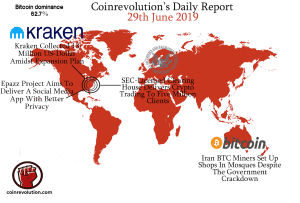 Social Media is increasingly becoming an important part of people’s lives particularly the millennials. In the recent past, privacy concerns and ownership of online data has been on the spotlight after cases of hacking, online fraud, and data misuse emerged. In view of these concerns, Epazz is developing a self-styled smartphone application that aims to proffer improved privacy for users on social media. Most importantly, this application is based on Blockchain sharing infrastructure and experts believe that the app will allow the app users to benefit from the many features of DLT. One of these benefits is the capability to share Bitcoin among peers instantly and easily in a secure ecosystem.