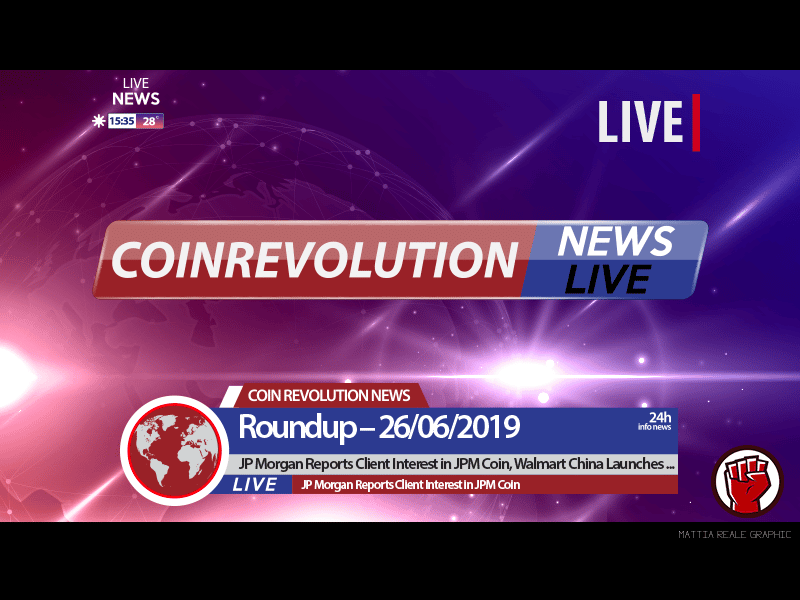 According to Bloomberg, JP Morgan has reported interest from its clients in the JPM Coin. The bank conceived the coin as a stablecoin that is backed by the US-Dollar. However, the blockchain has a wider use-case and could also be used to transfer bond-transactions faster than before. JP Morgan announced the creation of the coin in February 2019. However, the coin is only used internally and for test cases. The future of the coin does not seem to be determined yet as also Umar Farooq, head of innovation for treasury services and blockchain initiatives at JP Morgan, could also only speculate:

“JPMorgan will probably begin pilot testing JPM Coin with a few clients to see how it helps to quickly transfer money between them.” 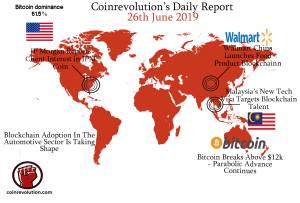 The Chinese subsidiary of Walmart launched its own blockchain project. Walmart China has partnered with Vechain & PwC among others to facilitate the project. The company announced on Tuesday that it is launching the blockchain to tackle problems in the food supply chain. The project encompasses over 23 participating brands already. Before the year has ended the company aims to add over 100 more items with focus on basic foods.

The price of Bitcoin continues to break through to new yearly highs since making it above the $10000 level. Bitcoin is moving parabolically again and has broken through the $12,000 level. It is FOMO time and the market is now eyeing $13,000. In fact, the price movement of Bitcoin reminds one much of the parabolic movement in 2017. It is well possible that Bitcoin goes above $20,000 again and reaches new all-time highs. However, we have warned in our technical analysis of yesterday that there is some unhealthy development in Bitcoin. Watch out parabolic movements end up in sharp and steep corrections.

Countries around the world are repositioning themselves to be the center of the next epic technological revolution that is set to be driven by Blockchain, Artificial Intelligence, Machine Learning, and other emerging technological innovations. In regards to Blockchain, it is fast emerging as the futuristic technology that can be easily remodeled to power different use cases in the enterprise perspective as well as the government institutions. In light of the benefits of Blockchain, Malaysia is launching a new technology visa that aims to attract international talent in the Blockchain space to the country.

Blockchain Adoption In The Automotive Sector Is Taking Shape

The Automotive Sector is set for a major transformation as an increasing number of car manufacturers adopt Blockchain technology. Some of the factors behind the surging adoption include the many use cases that the technology can be designed to proffer key solutions such as handling data, simplifying transactions, managing automobile supply chains, and creating a sharing economy for various players in the sector.