The International Monetary Fund – IMF has released a new report on international monetary policy regarding the new digital market and explaining how the digital coins will, one day, rise to lower demand for the central bank finances.

This report came after a staff discussion from IMF concluded that the virtual coins would one day reduce fiat currencies’ demand by introducing a quick shift from credit money all the way to commodity money.

The Future Of Cryptocurrency Assets 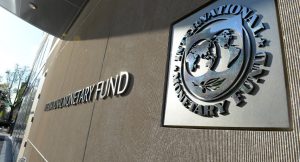 The International Monetary seems to be having a lot to say these days regarding Bitcoin and a host of other virtual coin services. Just a few days ago, Christine Lagarde, who is the current Managing Director of IMF, had so many positive remarks about the virtual assets, particularly Bitcoin.

The latest report that IMF has just released follows a picture displaying Bitcoin that was placed on the front page of its website just some few months ago. IMF has said that it cannot rule out a possibility that a number of digital coins will soon become adopted worldwide and fulfill a number of roles that are currently played by money in certain private online commerce networks.

A Sudden Shift On Methods Of Payment

The latest report by IMF has also noted that the crisis currently experienced in the international financial market has brought in fresh skepticism in certain sections of the world. There is a clear possibility that the Cryptos can influence the ordinary world financial policies. The study has also touched on payment shift topic where the virtual coins could one day replace the fiat currencies used in some quarters.

The other thing that was detailed on the IMF report was how banks and other financial organizations should tackle competitive pressure and how they should not relent on their efforts of solidifying fiat currencies as valid accounts’ units. The world financial regulator, however, noted that the virtual coins would have a hard time being accepted as standard units of accounts.

This is due to the fact that a number of Cryptos have become volatile due to valuations that are widely based on not so strong beliefs. The paper also noted that central banks could also be forced to introduce their own virtual coins. Even though the banks have so many opportunities and challenges in this market, they must do all they could to regain public trust and remain relevant at all times.

The only way of remaining relevant, according to International Monetary Fund, is by offering a number of stable units of accounts than virtual currency assets. The other way would be to make the money from the Central bank so attractive as a medium of exchange in the online money economy.

From this exclusive report from the International Monetary Fund, the organization appears so positive about the digital coins, and this is a good indication of good things to happen in this space.

IMF concluded by noting that the demand for Central money would only reduce if the virtual currency assets bring in a sounder role for the commodity money that is currently used in the online financial market.

One thought on “IMF’s New Report About Bitcoin”