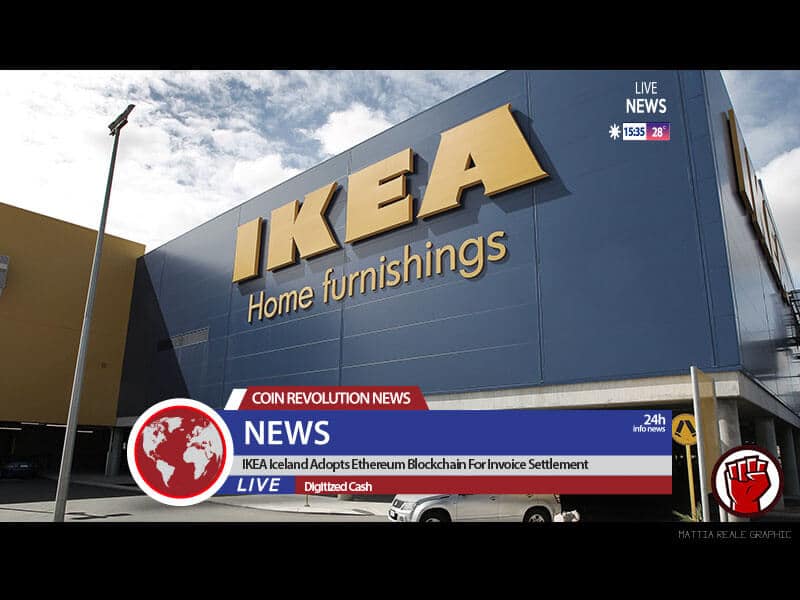 IKEA Iceland is pioneering the use of Blockchain to facilitate payment. According to reports, the furniture dealer has adopted Ethereum to send a digital version of the local currency which is the Icelandic króna.

Experts believe that following the successful application of DLT in accepting payments, a new era of invoice settlement is being heralded in the realm of Blockchain technology.

In the current financial setup, the main payment method is cash-based. Invoices are largely settled in Fiat money, through various modes such as EFT, Cash payments, etc. However, with the introduction of Digital Tokens, a lot of changes are happening that are disrupting the conventional understanding of financial models.

Some of the new and prospective users of Digital Coins claim that they are after privacy, decentralization, peer-to-peer, instant, and value proposition that these new currencies proffer.

Further, Digitized Cash transactions are confined in Blockchain systems which are a series of ledgers that are validated by inbuilt consensus mechanisms or direct peer-to-peer transactions as is the case on DAG-based systems like Hedera Hashgraph.

Ethereum is a Blockchain platform that is open-source, global, and designed for coders of decentralized applications. Engineers can build their applications on the mainnet and in so doing develop ERC 20 and other types of Ethereum Tokens that can operate within the DApp infrastructure.

Hence, IKEA Iceland has built its Blockchain system on the Ethereum Enterprise component from which they can send invoices to clients. Afterward, clients can see the invoices from their end and settle the balances in Iceland Kroners. The system then converts the Fiat money into Digital Tokens which are then transmitted on the Blockchain system.

Technical Aspects Of The Transfer

Iceland Ikea outsourced Tradeshift to facilitate the transaction. This is a US-based company that specializes in Blockchain systems.

Monerium, a Blockchain fintech acted as the intermediary by facilitating the conversion of the Icelandic Kroner to Fiat money. Additionally, the company ensured that the digital version of Kroner is supported on Ethereum Blockchain to facilitate the transfer marking a new era in the payment space.

What It Means For The Future

The successful transfer of Icelandic Kroner on Ethereum Blockchain assures all stakeholders in the financial industry that the future of money is in Digital and distributed systems. According to Gert Sylvest, co-founder of Tradeshift, governments will have to regulate programmable money to keep with the fast-paced –commerce world.

With the prospects of using a digitized version of its legal tender, Iceland is already set to issue a Digital Kroner for use within the European Economic Area (EEA).

In the meantime, the concept of Cryptocurrencies is at crossroads as it has been proven that Fiat Money can also be tokenized.