According to an IEEE report, Blockchain technology can be used in the Internet of Things (IoT) applications to protect devices.

Hacking Attempts On IoT Are On The Increase

IoT hit the market a few years ago with a buzz and there was a lot of interest in the technology from across many industries. However, hacking attempts of IoT systems are on the rise where several of them have been successful; a fact that is threatening to slow down its implementation.

The infrastructure that supports IoT is internet-based and is therefore very vulnerable as a forced entry to one device can compromise the integrity of the whole system. Unfortunately, hackers can then proceed to sabotage IoT operations with serious implications to the victims.

Blockchain Can Solve The Problem

The application of Blockchain technology can eliminate the uncertainty and risks that the security blind spots pose to IoT systems.

Each Block is protected through a dedicated code and even if a hacker gains entry to one device the general mechanisms of DLT prevent the hacker from proceeding further with gaining entry to the rest of the network.

Therefore, integrating Blockchain to IoT systems is the best option for securing the systems in businesses or homes from hacking.

The Same Blockchain Security Approach Can Be Applied In Healthcare Industry

The strategy of protecting IoT systems by Blockchain can also be applied in the healthcare systems as their infrastructure are similar. Like IoT, healthcare devices consist of interconnected computers with different work specifications in various medical disciplines. 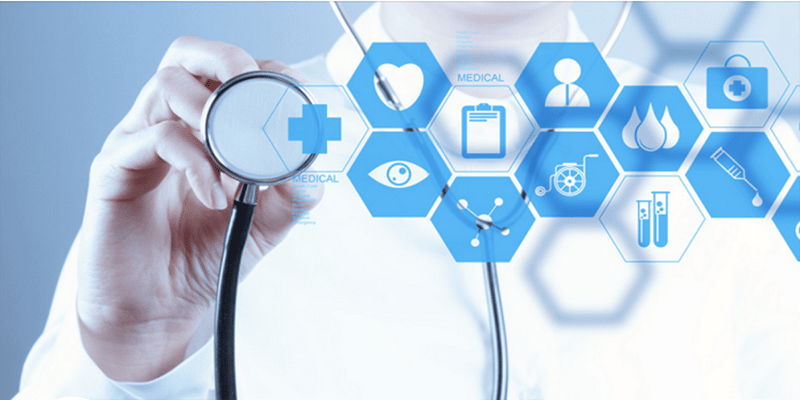 Therefore, digitization of systems such as the UK’s National Health Service on a mass scale can protect the whole system to ensure that the impact of hacking is not far-spread.

In addition to IoT and healthcare systems, Blockchain technology can be applied in the protection of other public utilities such as smart grids. The system is also operated from a number of front-ends and this increases susceptibility to various risks that Blockchain is eliminating.

Hence, Blockchain technology can offer security to multi-device and multi-user platforms as it has features such as decentralization, immutability, proof-of-work, proof-of-authority, privacy, anonymity, etc. that prevent hackers from accessing data.

Distributed Ledger Technology is basically a spreadsheet that may be accessible to a public community but cannot be edited as each recording on the blocks is immutable and also cryptographed.

It is, therefore, ideal for transparency, security, and record-keeping initiatives that are fundamental to all systems.

However, to realize the benefits of Blockchain, there has to be a high number of users to return positive ROI. According to Statista, the adoption of the technology is steadily increasing where it surged from $93 million in 2013 to $1.032 billion in 2017 as startups developed their own DLT-based platforms.

Nonetheless, limited application and scalability are reducing interest in Blockchain among prospective clients but Blockchain developers are looking for a solution.

One thought on “IEEE: Blockchain Can Protect IoT”