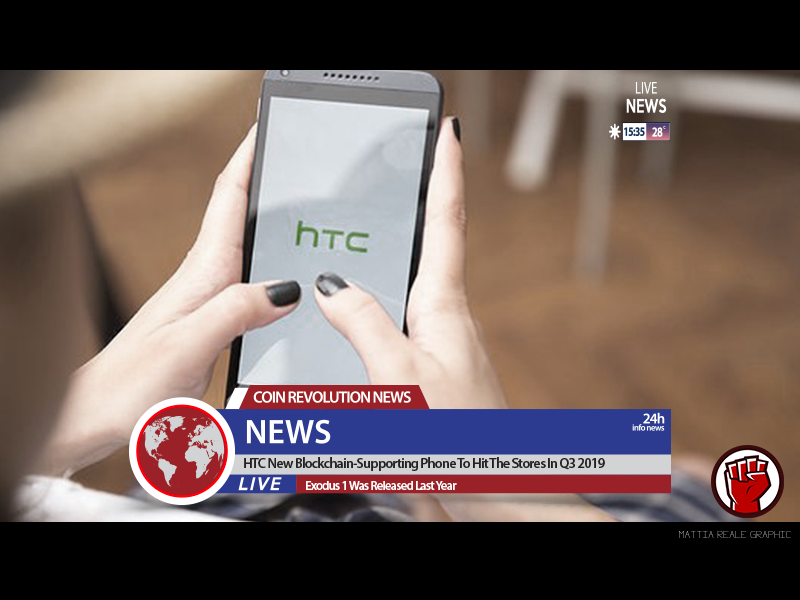 2019 is yet another year that HTC is due to release another version of its Blockchain-supporting phone. This is according to an announcement by HTC’s decentralized chief officer Phil Chen.

In late 2018, HTC released its first Blockchain-friendly phone dubbed as HTC Exodus 1. The smartphone has been titled as the “native Web 3.0 Blockchain phone” is best known for its inbuilt Crypto browser for Bitcoin Blockchain platform.

This phone has also been recently been integrated Etherscan widget to allow users to access the Ethereum Blockchain.

A Sneak Peek Into The Upcoming HTC Exodus 1s

While speaking at the Magical Crypto Conference in New York, Phil Chen from HTC gives an outlook of what to expect on the new smartphone.

Firstly, Exodus 1s will be able to support a full Bitcoin node. This means that peers in the Bitcoin ecosystem will be able to verify data on their phones for convenience.

The essence of the Bitcoin node is also to enable users to fully own their keys and have full autonomy on their BTC Tokens.

The Bitcoin node support feature builds on the Exodus 1 architecture that allowed users to manage their private keys. The Exodus 1s is going a step further by giving them ownership rights of their Cryptos.

Secondly, the new version will have an inbuilt software development kit (SDK) that will support Exodus 1s crypto wallet application and the Zion vault. Additionally, the SDK will support in future the social key recovery mechanism that is fundamental for users to access their Blockchain nodes after losing keys.

Other than the scanty information, there is no other official release detailing about specs of HTC Exodus 1s.

How Powerful Will The Exodus 1s Be?

Chen further divulges that 1s will be powerful enough to support a full Bitcoin node. In order for this to be a reality, the phone should have at least 200 gigabytes of capacity as the Bitcoin Blockchain has the same size.

Given the fact that the Bitcoin ecosystem expands by approximately 60 gigabytes in a year the phone is likely to have bigger storage than conventional smartphones to enable customers to run the Bitcoin Blockchain in the long run.

It is also important to note that the HTC Exodus 1s will be able to support conventional mobile operations such as apps support, picture and video support, calls and messaging, and more.

While the Exodus 1 retails at $699, 1s is set to sell at between $250 and $300. The company is confident the phone will meet consumers expectations and it will be more successful than its predecessor.

The Crypto Community Is Excited Ahead Of The Release

On behalf of the Crypto community, the co-founder of Ethereum, Vitalik Buterin expresses his excitement by hailing Exodus for “putting in the work” to make Blockchain and Cryptos easy to use for everyone as well as safe.