Hackers have stolen XRP with the value of almost $10,000,000 from GateHub wallets. Enej Pungercar, founder and CEO of GateHub, stated publicly that the website had been compromised. Around 100 wallets are concerned, according to him. Recent investigation from GateHub revealed that there had been an exploit in the api of the website. The service provider recommended its users to transfer their cryptocurrencies to safe wallets. 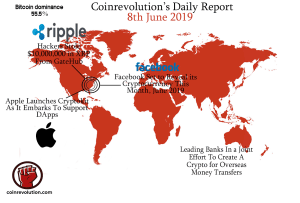 Apple Launches Cryptokit As It Embarks To Support DApps

Distributed Applications that are powered on Blockchain could be one of the next big innovations that Apple is offering its vast number of users. The company is unveiling its cutting-edge cryptography-oriented tool kit codenamed Cryptokit. However, it is important for all blockchain and crypto enthusiasts to know that Apple is not mentioning whether the platform is intended to facilitate the adoption of blockchain technology or the crypto economy on its brand devices. Nonetheless, one can speculate that Cryptokit could be a platform that supports the growth and development of blockchain and cryptocurrencies.

According to the Nikkei Asian Review for June 3, 14 major financial services providers in the banking sector are in a partnership to develop a cryptocurrency for overseas money transfers. Led by UBS Group, a Swiss multinational investment bank, the Cryptocurrency that is set to be modeled after Bitcoin will be ideal for settling cross border payments which is crucial for international trade and global economic cooperation. The joint effort also entails developing a blockchain that will support the use of the upcoming cryptocurrencies.

Facebook Set to Reveal its Cryptocurrency This Month, June 2019

Facebook, the largest social networking site in the world is set to launch its own cryptocurrency dubbed GlobalCoin. According to an article published online by The Information, the company has plans to launch the cryptocurrency this month, June 2019. The report also goes ahead to state that it will allow employees who have been working on this project, Project Libra, to take their salary in this new crypto, GlobalCoin, for the first time.