Reddit has people talking since combining a popular online game with cryptocurrency in a Fortnite Ethereum rewards platform. And while cryptocurrency users are quite knowledgeable, it seems the gaming community is stepping up to be more involved. Reddit is a forum-based online social platform that is testing out 2 types of Community Points built on Ethereum’s network. This was geared mainly to the Fornite community and the users of the Ethereum digital cryptocurrency to generate more activity.

The Specifications of Community Points

These 2 subreddit communities have a combined of 2.4 million users worldwide, so bringing them Community Points can be lucrative. The Community Points is to test both the Fornite users (r/FortNiteBR) and the Ethereum community (r/Cryptocurrency) for online activities. Hoping to give users Community Points as incentives for increased network usage, Reddit has quickly found who is on top.

Named Moons and Bricks, the points are designed in the Ethereum blockchain network platform specifically for users in Fortnite Ethereum. Located on Ethereum’s Rinkeby testnet, it’s been reported of over 11,000 addresses created specifically for Community Points already. Of these 11,000 addresses, it is apparent which community is dominating the online use by 80%:
• 9,091 addresses for Bricks points (Fortnite users)
• 2,166 addresses for Moons points (Ethereum users)

These Community Points tokens for Fortnite Ethereum users will remain on Rinkeby testnet for the duration of the summer months. If they prove to pass the trial run successfully, they will then graduate to the Ethereum mainnet. 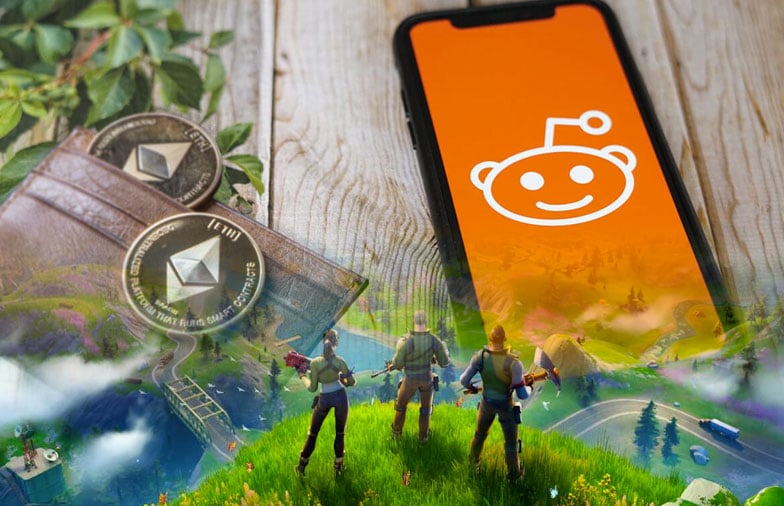 Is the Fortnite Ethereum Combination A Recipe for Disaster?

Although some believe this sway is due to more gamers online, Reddit is actually comprised of more Ethereum users. Having only made the announcement a short few days ago, seeing over Fortnite Ethereum 11,000 user addresses registered is a positive sign.

And while the generated interest may look good, some believe it is a recipe for disaster all over again. Examining past gaming and crypto pairings like CryptoKitties, Ethereum’s network suffered greatly trying to keep up to the user demand. Launched in 2017, this online game built into Ethereum’s blockchain network proved to lag the system with interested users.

How Will Bricks and Moons Benefit Users?

Examining the features of Bricks and Moons shows Fortnite Ethereum users how attractive it is for their digital wallets.
• Each Community Point reward (Bricks or Moons) can be used to trade freely within the community for numerous purposes.
• Currently, they can unlock special features like badges and GIFs, as well as display a user’s reputation within the subreddit.
• Both Bricks and Moons are handed out based on user contributions and the user’s karma.
• Distribution has been noted to list that it will be up to the online community but hasn’t released any specifications.

How the Fortnite Ethereum pairing will end up is anyone’s guess, but Reddit is hoping for the best. With the past experience of CryptoKitties under their belt, some concerns are diminished. Many are hopeful that all the bugs are worked out for this new combination and not have a repeat performance.