Ethereum Classic –ETC is one of the fastest-growing crypto coins. At the moment, the price of this coin is definitely in the final wave of an Elliott formation. The price is expected to go as high as 73,000 satoshis. This will happen before initiating a correction.

ETC’s long –term outlook still remains in a bullish state. This has been the situation since the price created a double bottom. The pattern would only be confirmed by a breakout above the mentioned resistance zone. The ETC price is in the process of moving above the current resistance level. This is what coincided with the 200-day moving average.

These are the sentiments by Nico – @CryptoNTez, a well-known crypto investor and trader. He added that he is looking for a retest of this price area so as to reenter the trader. The current target of the coin is 73,000 satoshis.

The ETC price has created a double bottom in the period from August to December 2019. The double bottom is usually known as Adam and Eve, which is around 50,000 satoshis. The main resistance area is found around the price of 73,000 satoshis. This is the breakout that could definitely confirm the new pattern.

The new resistance area is supported by the 300-day moving average – MA. The price might even hit 100,000 satoshis. However, this might only happen if it increases the full height of the pattern. 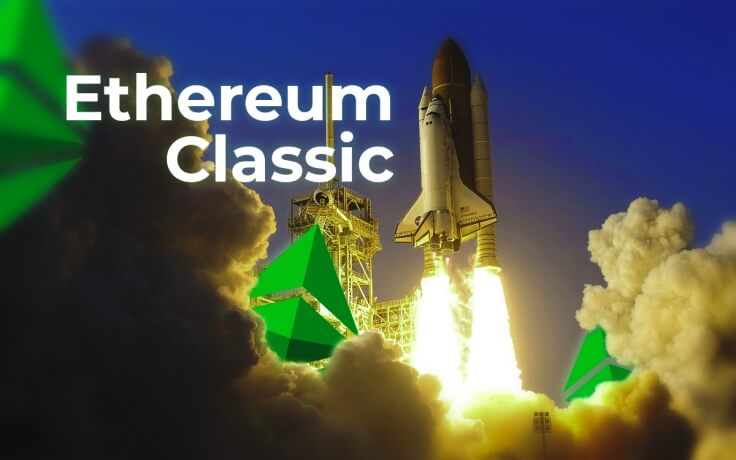 Accelerating The New Rate Of Increase

Since October 26th, the price of ETC has been on the rise. From that that time, it has also made a number of higher lows. But each time it has done so, it has also accelerated its increase’ rate. This has led to a much steeper ascending support line.

At the moment, the price is following the third such line. In the long run, this might be unsustainable. It also shows that the price could become parabolic up to the moment it hits 73,000 satoshis. It can also break down below the support line. When that happens, it might follow a more gradually sloping rate of increase.

The Future Movement Of ETC

The price arrangement of this coin shows a possible 5-wave Elliot Formation. The price seems to be in the process of finishing up the 5th and the last the wave. This wave is usually the steepest of all of it all.

The formation is supported by the declining volume and the bearish divergence in both the MACD and the RSI. These two are basically in the fifth and last wave. Therefore a retest of 64,000 satoshis area could be definitely seen. This is ETC future movement.