Estonia, a crypto-friendly Baltic nation has licensed Ibinex to operate in the country. The firm has been in Cryptocurrency business for some time where it provides a white-label solution for the various exchanges. The new permit is a major boost to a company that has been a member of the Financial Commission since 2007.

Ibinex has praised Estonia’s decision to allow it to operate in the country. The company believes that the new permit will enable them to provide white-label solutions for Cryptocurrencies to more people in the region. The new license will enable the company to join the Cryptocurrency exchange sector, a trading program authorized in the EU region.

The license will give the New-York based business permission to provide numerous services linked to exchanging Cryptocurrencies. Some of these services may include fiat to crypto, crypto to crypto, and fiat to crypto.

Ibinex has an ambitious program and wants to go beyond exchange operations. According to the company’s CEO Simon Grunfeld, they are already planning to begin offering crypto wallet services. The firm will provide hot and cold wallet services within the Estonian jurisdiction. Moreover, the company will produce unique security keys for its customers and will be the custodian of their encrypted keys. The firm will also store and transfer the virtual currencies for their customers.

Grunfeld said that this is the first license and they expect more in the future. He added that he was happy, as the company has become among the first exchanges to be licensed to operate within Estonian jurisdiction. He concluded by saying that, in this time of increased regulatory rulings in the EU region, he is happy as his company can easily identify a compliant framework where they can operate from.

How Estonia Has Become A Crypto-Friendly Country 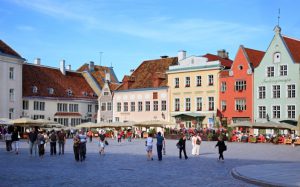 Estonia is one of the smallest countries in Europe in terms of population, size, and economy. However, the Balkan state has emerged as a leader in

Cryptocurrencies where other European members can learn. With a population of just 1.3 million, the country is home to some of the greatest technological innovations such as Skype.

Sometime back, Estonia proposed the creation of a national Cryptocurrency, making it the first EU member to do so. However, the proposal was strongly opposed by the Union. This is mainly because the virtual currencies can be used for transaction purposes, thereby replacing the traditional fiat currencies. The European Central Bank president Mario Draghi said that no EU member state should use its own currency in the region.

Despite the strong rejection by the EU on the introduction of national Cryptocurrencies, Estonia has gone ahead with a limited scale project. The country hopes that Estcoin, its own Cryptocurrency, will grow to facilitate transactions with its e-resident community. So far, about 35,000 foreigners in the nation have been issued with IDs under the program.

The steps Estonia is taking irrespective of discouragement from some members of the EU is an indicator that the country is committed to remaining a crypto-friendly jurisdiction. The country has demonstrated its willingness to allow more Cryptocurrency businesses.