Ernst and Young, the legal monitor of Quadriga CX’s case, has found proof for long held embezzlement allegations against Gerald Cotten, CEO and founder of QuadrigaCX. Cotten claimed no income from the exchange yet funneled the company’s money to his private account and bought private property, assets and services from it. Of about $214 million dollars in assets that QuadrigaCX should have only about $33 million could be recovered. 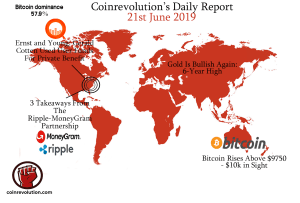 Gold has broken the $1400 level and thus reached a 6 year high. However, since the markets opened today the price fell again below the resistance. Still, the sentiment remains bullish. The Fed announced that it will lower the interest rates, this decision affects many financial products. The influx from such assets and the general economic uncertainty due to trade wars and a looming war on Iran. These conditions are partly the reason why gold rose in price as a store of value.

Bitcoin has picked up its pace again after a relatively calm week. Yesterday already the price broke above $9500, in recent hours it rose further above $9750. Most of the Altcoins have underperformed recently with the exception of Binance Coin (BNB). BNB could yet again reach another ATH at $37.47 and still seems to rise despite US users being blocked off from the original exchange of Binance.

3 Takeaways From The Ripple-MoneyGram Partnership

The prospects of Ripple and its native XRP Token are positive as far as adoption is concerned. This is because the payment platform has forged a key partnership with MoneyGram as the latter platform looks to offer cheaper and faster money transfer solutions for its global client base. Already the financial sector is gearing up for major disruption as RippleNet is set to overhaul MoneyGram’s operations and the remittance sector to a large extent. To better understand details of the partnership, there are key notes that Ripple (XRP) evangelists, the Blockchain community, and Crypto investors need to comprehend as they explore the risks and opportunities of either adopting Ripple’s technology for their business needs or investing in XRP Token.