The firm behind EOS, Block.one, will launch a social media app. Voice focuses on content creation and real users. In its official announcement, Block.one says that the value circulates “into sustaining the community, not corporate bottom lines.” Other social media platforms would reap the rewards that the users create. Voice, according to Block.one, will let the community have the rewards. However, the announcement is not yet very concrete about how it will achieve this ambitious goal. 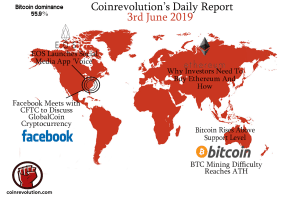 According to a report from the Financial Times on Sunday, the chairperson of U.S. Commodity and Futures Trading Commission, Christopher Giancarlo said that the agency has held a series of meetings with Facebook over the upcoming launch of GlobalCoin cryptocurrency. One of the main objectives of the meeting was to get a clearer understanding of the social media platform’s crypto stablecoin. Their understanding of how the cryptocurrency will function will help them to categorise it as per the existing CFTC regulatory remit. 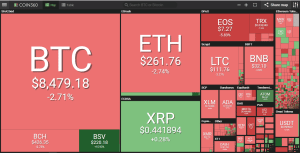 After rising above $9000 and crashing down again to the $8200 level, Bitcoin has recovered again. For now this is a good sign. The price of Bitcoin is currently $8550. We will analyze the situation of the market in a new technical analysis this week.

Why Investors Need To Buy Ethereum And How

When an Asset is bullish and has a high return on investment, the next logical question that comes into the perspectives of prospective buyers is how to acquire the asset. In the case of Ethereum, many Crypto enthusiasts are interested in hodling ETH for a number of reasons. The first one is the “Bitcoin rally effect”. Bitcoin has been bullish and in the first stages of its growth, the leading Token has been growing more rapidly than other Altcoins. However, a phase of correction followed by consolidation is coming where BTC is expected to lose ground and then consolidate its prize in a period where the price range will be fairly stable for days or even weeks.