Thomas Voegtlin, the founder and developer of Electrum, has declared during the BIP001 conference in Odessa will launch in the next few weeks. Voegtlin also stated that the next Electrum wallet will integrate the Lightning network. The Electrum wallet is the oldest service of its kind and was created in 2011 when Bitcoin was worth only a few dollars. As of now, it has become by far the most popular wallet service and it estimated that up to 10% of all Bitcoin transactions are conducted via Electrum. 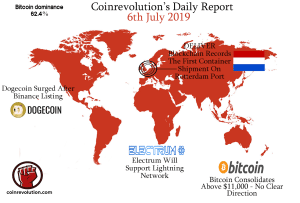 Binance has announced that it will list DOGE on its exchange. The cryptocurrency with the Shiba Inu as its icon will trade against BTC, BNB, USDT, USDC and PAX. This of course affected the price of Dogecoin which surged by 37% to $0.0045. The price, of course, declined again but currently the price is still higher than before the announcement ($0.0031) with $0.0036.

Bitcoin Consolidates Above $11,000 – No Clear Direction

Currently, the market still seems undecided. Analysts are predicting both directions. The market capitalization is still above $200 billion and the dominance of Bitcoin grew in the past 24 hours slightly by 0.2%. Click here.

Samsung SDS, ABN AMRO, and the Port of Rotterdam have successfully completed a Proof of Concept for their Blockchain project codenamed DELIVER. In the experiment, a container was traced and tracked from the Port of Rotterdam to a barge Terminal in Tilburg where the cargo was moved to a local warehouse. DELIVER is a Blockchain-based ecosystem that is being designed to manage international trade logistics from the point of loading a container on a ship, the voyage itself, and finally, at the port of landing. Hence, the successful completion of the Proof of Concept phase raises the probability of the revolutionary Blockchain platform being deployed for global adoption later on its roadmap.