Crypto legal for Wages in Costa Rica, Crypto Scams in Australia high as ever 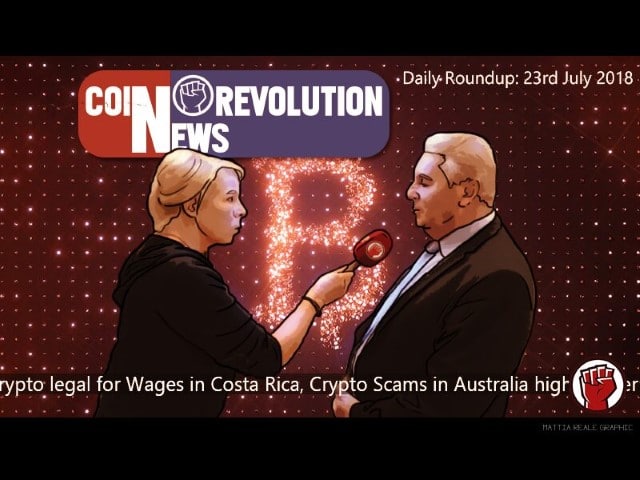 Adoption and scams seem to go hand in hand in the cryptospace. As the sentiment becomes more bullish again, so does the amount of people that are scammed. Australia warns its citizens from crypto scams while Costa Ricans can pay wages now in crypto legally.

Costa Ricans can be paid in crypto

Being able to pay loans in crypto is not the result of new regulations or laws in the country. Rather, it is a new interpretation of existing law. It is legal to receive or to pay loans in goods in Costa Rica. Law experts of the Mesoamerican country assure that cryptocurrencies can be seen as goods in this context. The national currency Colón was highly inflationary in the past thirty years of Costa Rica’s history. However, Costa Rica has thrived economically during the past decade and the Colón underwent low inflation and even a deflationary period. That makes cryptocurrencies not as interesting as in Venezuela where the Bolivar imploded in value. 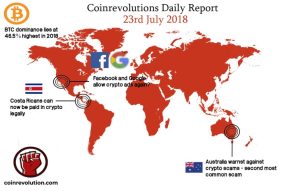 The official warning against scams by the Australian government states that crypto related scams are now the second most common investment scam in Australia. According to the report, Australians lose collectively a sum of $4.3 million AUD every month. The warning includes tips and advice on how to prevent and recognise scams preemptively. The most common scam is an investment scam where fraudsters pose as financial managers and promise high returns.

BTC dominance at its highest rate in 2018

The recent rally saw Bitcoin taking off. As usual, it dragged the altcoin market along – at first. After the rally, the altcoin market began to bleed. The BTC rally lost momentum as well, but so far there has not been a major correction yet. As a result, the BTC dominance has reached its peak for 2018 so far. And it could still go higher. An impressive display of bullish price action. See also our technical analysis from yesterday where we asked if Bitcoin is in a bull trap or really in a trend reversal right now.

Facebook and Google allow ads again – at least for Coinbase

Facebook and Google seem to have reversed their ban on cryptocurrency ads. But so far, only advertisements for the cryptocurrency exchange Coinbase appeared. As of now, it is unknown whether other crypto projects and companies are allowed to advertise their products again too. Coinbase CEO Brian Armstrong announced via Twitter that he is proud to see Coinbase white-listed again. It seems legitimate to suspect that some money flowed due to the fact that Google and Facebook white-listed Coinbase simultaneously.