Media executive and former Trump advisor Steve Bannon revealed to CNBC that he is going to launch his own utility token. The project will “potentially” be designed to support the “global populist movement”. However, he mentioned that it will only be released under the condition that “they got […] quality.” It is not unlikely that this token would be utilized in Bannon’s own sector, media.

The socialist government in accordance with the State Bank of Vietnam (SBV) agreed to halt and possibly forbid the import of mining hardware. Critics see this step as a consequent move to the government’s previous decision to forbid cryptocurrencies as a payment method. In the case of Vietnam, the suspicion of capital flight and foreign influence seem to be reasons for the agenda against crypto. 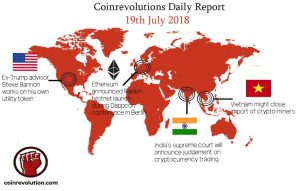 Ethereum represents itself currently at the developer conference Dappcon in Berlin this year. Of course, the mother project of all dapps and ICOs is seen as the highlight of this event. Lefteris Karapetsas, the main developer for the Raiden project announced the testnet launch there today. According to him, it’s the first step towards a successful mainnet launch. Vitalik Buterin revealed earlier that he prefers a slow advance of the project in small steps over delivering as fast as possible.

July 20, 2018, will be the day that the Indian Supreme Court will hear about the legality of Cryptocurrency trading which the Reserve Bank of India recently banned. It will be a great day for Cryptocurrency businesses in the country who have suffered huge losses since the decision by RBI took effect. Anonymous government sources claim the ban will be lifted allowing the sector to be regulated by relevant authorities.