Bitcoin is strongly above the $7000 USD-Level. The market is close to breaching $300 billion USD in total market capitalization. Bitcoin tested the resistance at around $6000 USD now three times in 6 months. To be above this resistance level now for the third time is a strong bullish signal.

According to a report by the Silicon Valley Business Journal, Bitmain will move into a 20,000 square feet office in San Jose. Bitmain is the world’s largest company that specializes in the production of mining hardware. It is also the most valuable company in the sector, deemed to be worth $12 billion USD. Bitmain is conducting a highly expected IPO later this year.

A high-ranking Iranian parliamentarian has said that the country may consider using Cryptocurrencies in an effort to evade the upcoming American sanctions. The lawmaker has added that the issue is to be discussed by the country’s parliament soon. The MP noted that he is optimistic that the digital currency can help in overcoming the US dollar dominance in international trade. 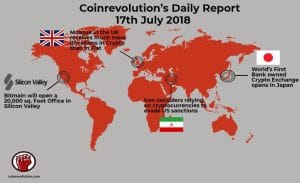 Cryptocurrencies have continued to experience high acceptability as a British mosque reported that it received more donations in the virtual currencies than fiat money. The decision to allow the use of Cryptocurrencies during the donation allowed the London mosque to collect funds from outside sources. The mosque revealed that there was one crypto transaction of more than £5,200.

SBI Holdings announced that it has finally opened its own cryptocurrency exchange. It is called ‘VCTRADE’. As SBI Holdings is a world-renowned financial giant with which financial experts associate professionality and trustworthiness. The bank has an official partnership with Ripple Labs. Therefore, it is no surprise that the first and primary trading pairs are in XRP. But BCH and BTC trading pairs have also been added before the exchange opened today. So far, the exchange is only available for Japanese citizens.