In the last couple of years, the world of technology has witnessed unprecedented advancements in technology that has improved almost every aspect of life. While this is something worth celebrating, cybercrimes have concurrently become rampant. Major industries have suffered irreparable losses in the hands of cybercriminals; crimes that mostly involve hacking and online money laundering.

One such industry is the Cryptocurrency market that depends entirely on online platforms for all kinds of transactions. Cybercriminals have successfully hacked and drained a whopping $1.2 billion from 2017. This is according to the findings of a nonprofit research group known as the APWG.

The rough estimate from this research company included all the major coin heists the market has witnessed, alongside other unreported thefts that actually occurred or are suspected to have occurred. Dave Jevans, chairman APWG noted that the scope of criminal activities using Cryptocurrencies has devolved from the traditional money laundering and drug trafficking to actual stealing of virtual coins and tokens. 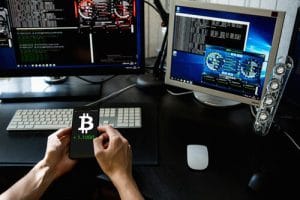 Jevans, who is also the founder of an online network Cryptocurrency security firm CipherTrace, further stated that out of the 1.2 billion US dollars in embezzled money, only a paltry 20 percent translates to about 240 million US dollars had been recovered until now. Jevans adds that law enforcing authorities globally have been on a steady follow up on these cases with some actually succeeding in making significant recoveries and have even gone a step further to prosecute the perpetrators behind these heists. Others have strong leads and might succeed sooner than expected

A Stab In The Face Of Law Enforcers

These leads and investigations might, however, be cut short if the newly proposed data regulation by European Union is implemented. The regulation termed General Data Protection Regulation (GDPR) is expected to take effect by Friday 25th May and will have far-reaching effects to the security of Internet within Europe.

Jevans, during an interview with Reuters, expressed concerns that the new regulations aimed at restricting access to important data on transactions carried online which will be an indirect aid to the cybercriminals. This will hinder ongoing investigations on crimes such as crypto jacking, virtual coin heists, and malware among other cyber frauds.

The regulation which passed successfully back in 2016 will water down the rules companies are required to adhere to so as to secure their data and also restores control of personal data and information to European Union citizens and residents.

Additionally, the implementation of this regulation means that Internet database holder in Europe WHOIS will no longer be required to publicly publish its records any time after May 25, 2018.

Jevans further expressed concerns that WHOIS until now plays a critical role in aiding cybercrime investigations because investigators heavily rely on the data they publish. With this no longer guaranteed cybercrimes will become extremely difficult to track because no reliable data is available. Europe will eventually become a dark market that is viable for all cybercrimes. All cybercriminals are likely to move to Europe in due time to execute their ills.