CryptoCompare Will Rank Trustability of Exchanges

CryptoCompare has announced that it will create a ranking that will compare different exchanges according to their trustworthiness. The ranking will include over 100 exchanges and compare them in different parameters that will make their trustability comparable. The information that the ranking includes are all public. The service takes into account the legal frame and the regulation under which an exchange operates, the team behind the exchange, the transparency of an exchange as well as its market surveillance means. 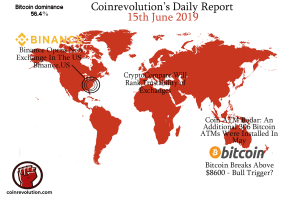 Binance Opens New Exchange In The US – Binance.US

The market reacted to Binance’s terms of service update which states it will close its service to US customers. In reaction to this, Binance’s native cryptocurrency, the Binance Coin (BNB), has lost over 11% in valuation today. However, as of writing this prices are already recovering. Binance did not disclose why it decided to take this step. But other exchanges that operate in the US had recently stepped up their customer information requirements (KYC & related regulations) as we reported yesterday. Many news outlets including ourselves wrote about this. The news suggested that Binance would entirely stop their operations in the US. However, today Binance announced that it will launch a separate service in the US under Binance.us. The exchange announced this on its own blog.

The price of Bitcoin has surged to a critical zone where it could trigger a further bull run. The $9000 level could be tested soon. However, at this point the market is not safe of becoming a bull trap which could trigger a further selloff. If you decide to take this trading opportunity, research reasonable stop/loss occasions.

Coin ATM Radar: An Additional 306 Bitcoin ATMs Were Installed In May

Cryptocurrencies are the futuristic modes of payments that are rewarding to hodl. New data from Coin ATM Radar gives evidence of the growing demand for Crypto as it shows that in the month of May 2019, a total of 306 Bitcoin ATMs were installed around the world. This number could be small from an absolute number perspective, but on the standpoint of growth rate, it is a meteoric improvement since in a similar period last year only 98 Bitcoin ATM machines were added which is a growth of 312%. The latest growth now brings all active Bitcoin ATMs in the world to a total of 4898 which is a significantly high number given that Bitcoin itself has a market cap of around $145 billion and relatively a new concept of investment.