The Securities Exchange Commission chairman Jay Clayton doesn’t think cryptocurrencies are all bad after all. Clayton was speaking at the “blockchain infrastructure” conference at the Fintech week 2019 being held in Washington DC. He also claims that crypto violations are on a decrease.

Clayton seems to give crypto the benefit of doubt, claiming that the community is still learning and educating itself on the security laws and its application to virtual currencies. It now seems that the tide is turning slowly but steadily.

Crypto’s Reputation with the SEC

Cryptocurrencies have been known to have the worst reputations with the US security and exchange commission. The commission had been having a hard time regulating cryptocurrencies. The two parties couldn’t seem to agree even on the fundamental definition is security, the ICO crackdown last year and the slew of Bitcoin ETF proposals.

At around the same time that the disagreements were on their peak, the differences between the two were very conspicuous, especially during the ICO boom. The SEC saw a lot of dubious crypto investments.

Companies would publish lots of literature on the ICO project with ridiculous valuations with no backing. Investors would flood to fund the projects and then end up being defrauded of their hard-earned investments. A crackdown on ICOs commenced and the fraudulent dealings now seem to have stopped. The SEC chairman cautioned investors who don’t follow the SEC guidelines before investing.

SEC ‘Supports’ The Use Of Coin Offerings

But despite being full of risks, ICOs are not out of bounds as far as the commission is concerned. On the contrary, Clayton asserts that the SEC fully supports coin offerings and other fundraising tools in the crypto ecosystem as well as long as they are fully registered with the regulatory authority.

Such a product that requires a level of retail impetus also needs a level of regulation and protection of the Securities act, he added. 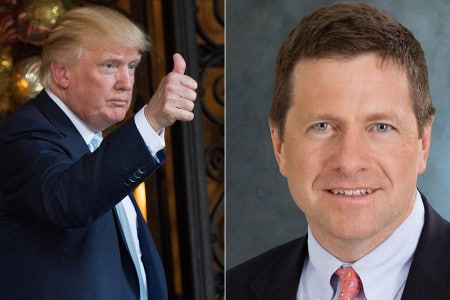 The industry’s prime period of mainstream recognition came after Clayton took charge of the SEC. his appointment by President Trump came at a time when bitcoin’s price wat at around $2000. It later went on to reach a new an all-time high at the end of that year.

Bitcoin has been contractually and organically restricted from the larger market and Clayton has not been quiet about it. Back in September, he asserted that bitcoin’s price discovery does not have the same rigor as products listed on the New York Stock Exchange and NASDAQ. To see any approval, they have to be tightly regulated.

Considering his tough stance in the past, that is a compliment.