As of now, free-market competition and charity is something people do not associate with each other. As a matter of fact, many people think those two concepts are opposed. A majority of charity organizations themselves share this notion and make free-markets responsible for creating poverty. An example of such a project within the crypto space is Manna.  However, extreme poverty has never been as low as today and we can expect that it decreases even more in the future, according to the World Bank. As cryptocurrencies are being adopted more and more over time, they will maybe play a role in this development. Especially as they seem to change the nature of charity.

How Eat BCH changed the nature of charity

Eat BCH is a spontaneously created project. It is mainly led by two Venezuelan brothers, José and Gabriel. An anonymous Bitcoin Cash user wanted to send some Venezuelans money so they could buy something to eat for Venezuelans in need. José received $5 USD in BCH and bought food for his neighbourhood. The pictures that he made during the event were too big to just send them by E-mail. So José created a Twitter account which was essentially the start of Eat BCH as a project. Since that, a lot of people donated to the cause. Eat BCH is a good example of how cryptocurrencies are changing the nature of charity.

Crypto can help effectively, individually and without a middleman

There are many problems with traditional charity organizations. Each year there are hundreds of scandals around such organizations that are supposed to help people. There are sexual abuse scandals, corruption and it is unfortunately not well known that states use foreign aid as a geostrategic weapon to achieve their own goals. But even without all these scandals, charity organizations are huge bureaucratic monstrosities, with many backdoors and a lot of space for misusage. They cost an immense amount of money to maintain themselves.

Crypto, on the other hand, allows you to support an individual person and to control the usage of your funds to a certain degree. As you can check the address that you sent money to. If the person does not provide proof for using your funds for a charitable cause, you can easily seize to send them money as well. The point is that money sent via blockchain arrives the poor people directly and thus effectively. 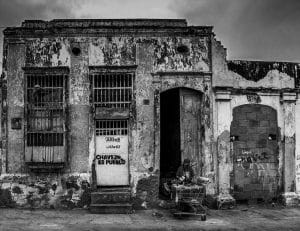 A street scene in Maracaibo, Venezuela

Competing for the poor

Eat BCH was not created to prove that the Bitcoin Cash fork is better than Bitcoin Legacy (you can read about José’s view on charity and ethics here). However, the community portrays the project in such fashion. It points out every now and then that transmitting funds is less costly with BCH than with BTC. A fact that is even more important in poorer countries. Competition over who can help the poor better and more efficiently is a good development and it would be very desirable if more projects, companies adopt this way of thinking.

But there are also other projects that compete for the poor. Like Paxful, a crypto exchange that is reaching out to the unbanked of Venezuela. Paxful’s app includes a fiat converter that lets people know how much USD or Bolivar their currency is worth and how much they have to send to buy something. Venezuela’s own fiat currency is basically useless for Venezuelans. As it loses its value by the hour and the IMF expects an inflation rate of 1,000,000% by the end of the year.

Even airdrops and bounty campaigns give people money without much effort. Electroneum’s mobile miner gives people ETN for free and on a regular basis. This way it is much more effective in providing some sort of Basic Income than cryptocurrency based basic income projects themselves which lose value faster and decrease their distribution over time.

These developments could become more impactful in the future

If we are in the phase of early adoption, the “competition for the poor” may also just have started. Charity in a competitive fashion might become more viable with growing popularity and attention. Some airdropped tokens might gain value in the future and could contribute to the budget of poor families.

Mass adoption in poor countries is a good strategy to global adoption of a currency. If you can help people in totalitarian states, with poor infrastructure and an insufficient supply of basic means through cryptocurrencies, they might very well be beneficial to the rest of the world too. If crypto money serves as money under the worst of circumstances it should easily work in industrial nations too.  So, let us hope that this development carries on and helps even more people in the future.

Brace Yourselves for the Most Controversial Bitcoin Forks

Where To Buy Bitcoin Cash